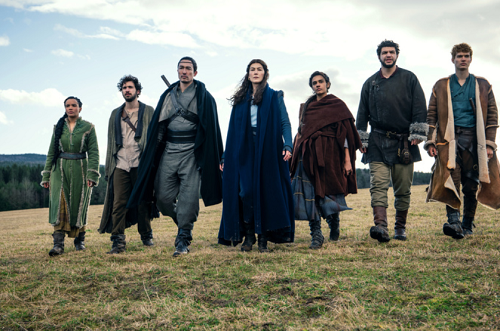 The Wheel of Time

There is no denying that it is an exciting time to be a fan of fantasy novels and comic books. The world is witnessing a new era of fandom with mega blockbuster films and extravagant shows that transport the viewers to a different universe. Amazon Prime Video’s new epic fantasy series The Wheel of Time is giving the fans of the genre a world of dragons and dark sides in a whole new mystical set-up, and we are here for it!

Here are some things that will absolutely compel you to not miss the show that has been developed by showrunner Rafe Judkins:.

Fantastical book to screen adaptation: Who wouldn’t like to see their favourite fantastical  novel come to live on the screen. The Wheel Of Time was originally made up of 14 novels and a prequel novel created by the American author Robert Jordan. After the author passed away while working on the final installment, Author Brandon Sanderson picked up the torch and completed it with three novels using his exhaustive notes.Showrunner Rafe Judkins confirmed that the first season will cover parts of the first, second, and third books. A second season is already in the works

The Wheel of Time influenced Game of Thrones: While the author Robert Jordan started writing the novels in the mid 1980s, there was  only one epic that had dominated the entire genre. No points for guessing it was Tolkien’s Lord Of The Rings. Jordan broke the format of the trilogy and thought differently, persuaded his publishers to allow him weave a sprawling tale over multiple volumes. George RR Martin has gone on record previously to give credit to the author saying, “I don’t think my series would’ve been possible without the Wheel of Time being as successful as it was”. Now we know why the worlds seem familiar to the viewers

Feisty and fiery women characters: Most of these fantasy and marvelous worlds have been predominantly led/ ruled by male characters and women have only been supporting them in their quest but The Wheel of Time makes a great gender spin and the world is led by extremely passionate and feisty women, who rule and protect their worlds – they are the warriors, the rulers and the saviours.

Impeccable Ensemble Cast: It is said that, in a film/ series it is the character and the cast playing the roles that make or break the plot/ narrative of the story. With powerful and talented actors like Rosamund Pike, Daniel Henney, Zoe Robins among others in the ensemble cast and their incredible talent has made the universe come to life. Visually grand and brilliant performances, what more could a fan want.

But What is The Wheel of Time concept?: It is a mythological concept that is exactly what it sounds like: a wheel that turns through time. Made by the Creator, the Wheel has seven spokes, each representing a different age: Jordan’s series takes place towards the end of the Third Age. There are two big things to remember about the Wheel: first, the Wheel weaves the Pattern of each age. Whatever happens, happens because the Wheel wills it. Second, the Wheel turns thanks to the energy of the True Source, which is also the source of the One Power.

Sounds complicated yet intriguing? Watch the first three episodes of The Wheel of Time now on Amazon Prime Video to know more.  The high fantasy novel series is available in English, Hindi, Tamil and Telugu and will have a weekly release culminating on December 24.