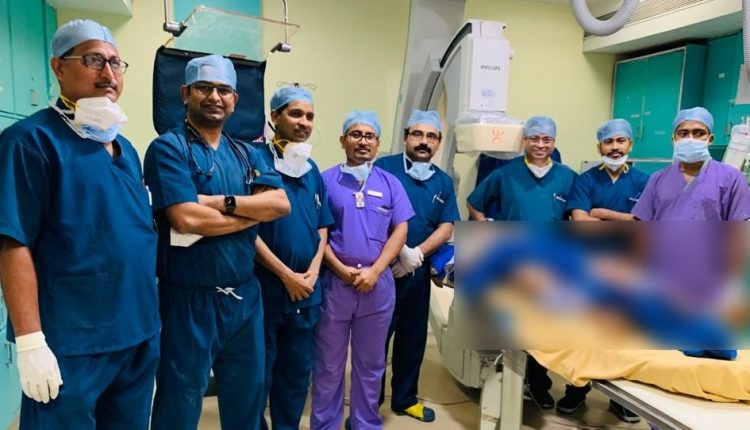 Hyderabad: Medica Superspecialty Hospital, the largest private hospital chain in Eastern India has set a benchmark in treating patients on Extra Corporeal Membrane Oxygenator (ECMO). The hospital is in its quest for superior and innovative treatment when it comes to any major form of treatment. For the first time in Eastern India, Medica has conducted angioplasty on a 73 year old patient on periprocedural ECMO support. The entire treatment was done under the team of experienced doctors from departments of cardiology, cardiac surgery, critical care and cardiac anesthesiology. The team put in their combined efforts for this unique case under the leadership of Dr Arindam Pande, who was ably supported by ECMO specialists Dr Dipanjan Chatterjee and Dr Apran Chakraborty to achieve this momentous feat in September 2021. Medica Superspecialty Hospital becomes a part of only a handful of special league hospitals in India and globally to conduct such innovative treatment in the history of cardiac diseases.

Mr. Badal Das (Name changed) 73 year old patient was admitted at Medica with severe chest pain on September 2021. Post clinical evaluation, the team of doctors diagnosed that Mr. Das had suffered a massive heart attack. He also had a medical history of advanced stage ILD (Interstitial lung disease) for which he was already on inhalers and immuno-suppressive therapy. Coronary angiography was performed on the next day, which revealed critical heart blockage in the Left Main coronary artery along with other blockages. In normal circumstances when a patient has this kind of blockages, bypass surgery is considered first treatment option. But as Mr Das was suffering from advanced chronic severe lung disease (ILD), bypass surgery was considered very high risk for him because of possible difficulties in perioperative ventilation management and weaning. Due to his compromised lung condition, a medical board (Medica’s Heart Team) was organized in presence of Interventional Cardiologist, cardiac surgeon, Anaesthetists and critical care specialists. The team decided to go for peri-procedural V-A ECMO supported intravascular ultrasound (IVUS) guided coronary angioplasty. Dr Arindam Pande conducted the high-risk angioplasty on ECMO support. Patient remained awake during the procedure and mechanical ventilation could be avoided. Ultra high pressure coronary balloon (OPN NC Balloon) was used to deal with very severe calcifications of the coronary blockages. After the successful operation, Mr Das was released from ECMO support on next day morning and was finally discharged from Hospital after 3 days.

Commenting on the miracle surgery, Dr Arindam Pande averred, “Medica Superspecialty Hospital has the largest ECMO facility in Asia. We have treated multiple patients on ECMO support during the COVID times. This is really an innovative case as it was planned and periprocedural ECMO support happened for the first time in Eastern India. As Mr. Das was suffering form Interstitial lung disease, bypass surgery would have been very high-risk procedure for the patient. So we planned for high risk complex coronary angioplasty utilizing ultra-modern medical equipment such as IVUS, OPN NC Balloon and periprocedural ECMO support. Because of this advanced treatment patient could resume his normal life very early and currently doing fantastic. I want to thank the entire team for this outstanding achievement”.

Having set benchmarks in patient care, Medica Superspecialty Hospital, which has a world-class comprehensive cardiology and cardiothorasic surgery departments at the Kolkata facility,  is widely known for its excellence in cardiac care has now added another feather to its cap, after successfully conducting this high-risk operation. It has become a one stop destination for all the modalities of extensive cardiac treatment facilities including coronary interventions, electrophysiology, structural heart disease, congenital cardiac disease, heart failure management, cardiac device therapy and heart transplantations.