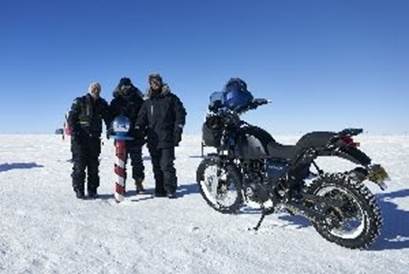 Kolkata : Royal Enfield is the world’s oldest motorcycle brand in continuous production since 1901. Riding through time and tough terrain, Royal Enfield has tested the endurance of man and machine time and again, while remaining relevant and desirable through the ages. Today it has created history by successfully completing the 90° SOUTH expedition, its quest for the South Pole on the Royal Enfield Himalayan. This extraordinary endeavour is a tribute to the brand’s commitment to pure motorcycling, and to the courage and resilience of innumerable riders and explorers who have made history with their motorcycling journeys.

On December 16, 2021, two riders Santhosh Vijay Kumar and Dean Coxson, reached the geographic South Pole in 15 days, making this ambitious attempt a reality. The team arrived at Novo in Antarctica from Cape Town for four days of acclimatization, loading of supplies, checking equipment and the motorcycles. From Novo, the team covered an overland distance of 3200 km over the next 9 days, braving extreme climatic conditions with temperatures between -30 to -25 degrees and wind speed of 60kmph, towards Ross Ice Shelf. Located in the extreme south of the continent, Ross Ice Shelf was the designated starting point for the riders. However, an unexpected blizzard forced the team to alter the course. Instead of starting the ride from 86 South, the team started the ride from 87 degree South. Despite a few initial road-blocks and a slight detour, the expedition team completed the quest on December 16, 2021, creating history.

For this expedition, two Royal Enfield Himalayan motorcycles were modified in-house, with functional upgrades to be able to navigate snow and ice to ably function under extreme conditions in Antarctica. The motorcycles were ridden on a compacted snow track to the South Pole, to reduce motorcycle drag  and limit emissions to an absolute minimum. Royal Enfield is consciously ensuring no footprint is left behind by the expedition team except wheel tracks that will quickly be lost to snow drift. In line with the brand’s #LeaveEveryPlaceBetter initiative, the team is ensuring all waste including human waste is brought back for appropriate disposal.

Currently the team is heading towards Union Glacier, the western part of Antarctica, from where they will fly out to Punta Arenas, Chile.

4 Trends That Will Drive The Startup Sector in 2022