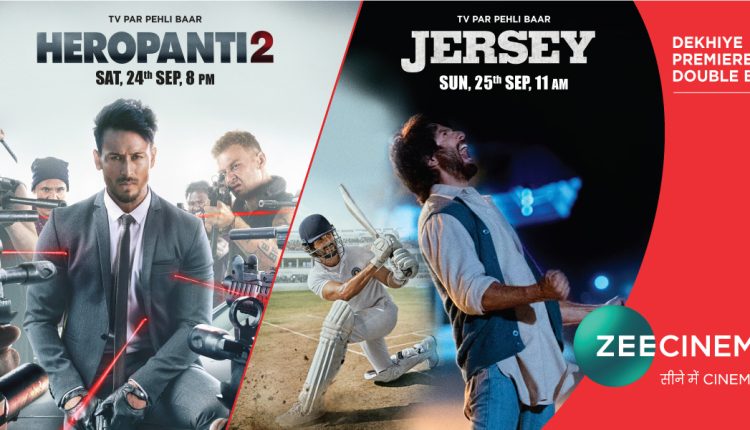 If Blockbuster entertainment is what you are looking for, there’s nowhere to be than on Zee Cinema this weekend! Get ready to board the rollercoaster of solid entertainment with the World Television Premieres of Heropanti 2 and Jersey on Zee Cinema. Join Tiger Shroff in Heropanti 2 and fight the world of crime like never before on 24th September at 8pm and ease your Sunday afternoon with a heartwarming story with Shahid Kapoor’s Jersey on 25th September at 11am.

Action, drama and romance – Heropanti 2 has all this and much more. One hero, one villain and one deadly cyber-crime! A few masterminds plan to loot all of the nation’s bank accounts at once, but the deadly crime lord Laila’s plans face challenges when ace hacker Babloo catches his trail. As the two give us a chase of a lifetime, the film’s catchy dialogues and chartbuster music takes the entertainment meter to the max! Helming this electrifying action-drama we have Tiger Shroff, Nawazuddin Siddiqui, Tara Sutaria in lead roles and Kriti Sanon in a special appearance.

Once a champion, always a champion? A question that is always in debate. With Jersey we follow the journey of a talented but failed cricketer and his attempt at reclaiming his lost title, mend relationships at home/ with his wife and be the hero his son sees him as. Working through his struggles, we witness a heartwarming camaraderie between him and his son which eventually becomes his center of motivation. Bringing this moving tale to the celluloid, we have the spectacular Shahid Kapoor along with the legendary actor Pankaj Kapur in key roles. Along with them, we see Mrunal Thakur and Prit Kamani in pivotal moments. The film screens a strong narrative padded with captivating performances and music that ties it all together.

So, tune-in to catch double blast of entertainment with the World Television Premieres of Heropanti 2 and Jersey on 24th and 25th September respectively