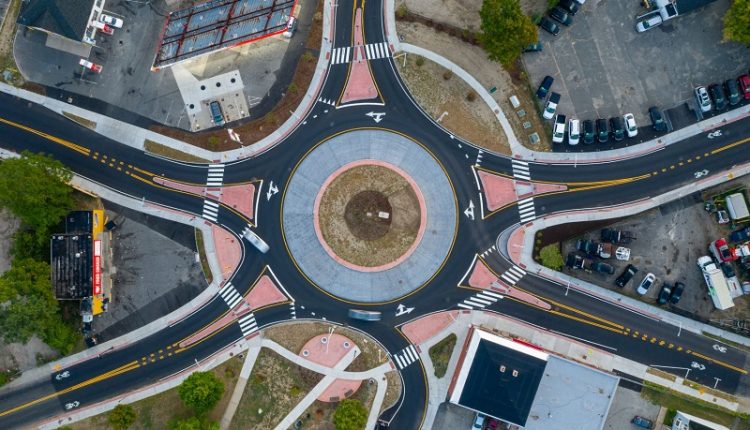 The American Council of Engineering Companies of Massachusetts (ACEC/MA) has named Fuss & O’Neil as a 2021 Silver Engineering Excellence Award winner for their work on the Six Corners Roundabout in Springfield, Massachusetts.

As part of the City’s efforts to rebuild the Six Corners neighborhood after the 2011 tornado, Fuss & O’Neill partnered with the City of Springfield to develop intersection improvements at this heavily traveled intersection in the heart of Springfield. The six-legged intersection was plagued with long delays, high accident rates, and unsafe pedestrian accommodations. Fuss & O’Neil worked with the City to develop a series of potential roundabout design options for the intersection. The design balanced complex geometry challenges to meet the City’s integrated goal of improved traffic circulation, improved safety, and creating a public space connecting the neighborhood.

The Six Corners roundabout is a major success story for the use of a 6-legged urban roundabout in an area that has typically been plagued with high speeds and accidents, and an investment in an otherwise neglected area of the city. While the community was skeptical at first, since the close of construction it has been reported that the new roundabout has significantly changed the experience of drivers and pedestrians in the Six Corners area of Springfield.

“It was a pleasure to collaborate with the City of Springfield and local stakeholders on this innovative and well received project that has enhanced vehicular and pedestrian safety of a high hazard location, represented a major investment to improve the aesthetics of the neighborhood, and will serve as an example for similar improvements City-wide,” said Project Manager, Steve Savaria, PE, PTOE.

“The ACEC/MA Engineering Excellence Awards Competition recognizes engineering achievements that demonstrate the highest degree of merit and ingenuity,” said Scott A. Miller PE, President of ACEC/MA and Regional Vice President for Haley Ward. “We celebrate this year’s outstanding engineering achievements, congratulate our winners and thank them for their contributions to improving the quality of our everyday lives.”