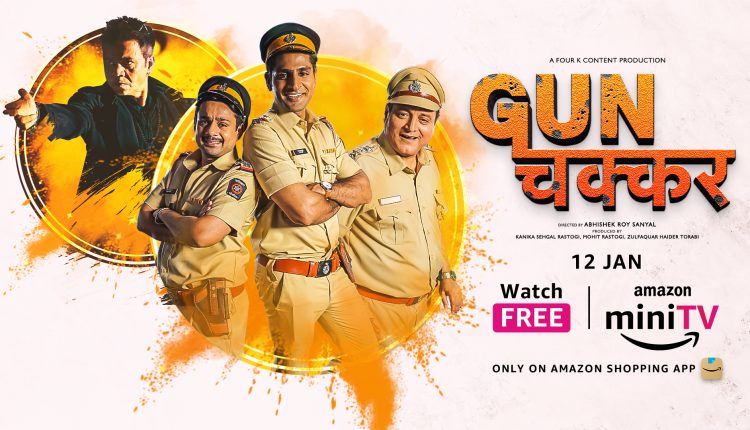 Mumbai : Amazon miniTV – Amazon’s free video streaming service is all set to take the audiences on a laughter riot with its upcoming short film, Gunchakkar. The streaming service today unveiled a hilarious trailer of the short film which will remind viewers of the cat and mouse race that never gets tiring. The hysterical narrative, characters and cast makes it for a promising and engaging watch. Produced by Four K Content and Directed by Abhishek Roy Sanyal, the short film features popular actors Rajpal Yadav, Vaibhav Tatwawadi, Hussain Dalal, and Manoj Joshi in pivotal roles. Gunchakkar is set to premiere and stream exclusively on the service, for free, 12th January onward.

The trailer gives a sneak peek of a face-off between two police officers, Jay Salunke (Vaibhav Tatwawadi) and Vipul Thakkar (Hussain Dalal), and a local gangster (Rajpal Yadav). The two officers fire two bullets at the gangster but only one hits him and the other hits the car. As the officers get overjoyed at the prospect of winning a presidential medal for their brave deed, things take a turn when their situation puts them under the microscope of the law. To know what happens next, watch Gunchakkar on Amazon miniTV on 12th January.

“We are glad that we could bring to the audiences such a story like Gunchakkar, featuring some of the ace artists of our country. You are surely in for a lot of laughs! We are sure this comedy-drama is loved and appreciated by the audiences across India,” said Girish Prabhu, Head of Amazon Advertising.

“We, at Four K Content, are excited to bring a short film which is a complete pack of entertainment for our audiences. Gunchakkar is a simple story that has elements that make it hilarious and engaging. We are glad that we could partner with Amazon miniTV for this project as it not only provides a platform that helps us reach a wider audience, but also is known for providing compelling and entertaining content.” said Kanika Sehgal Rastogi, Four K Content.

So, get ready for a game of Chor-Sipahi as Amazon miniTV brings Gunchakkar, written by Akshay Parvatkar and Sangharsh Mane. Gunchakkar will stream on Amazon miniTV within Amazon’s shopping app and on Fire TV for free.