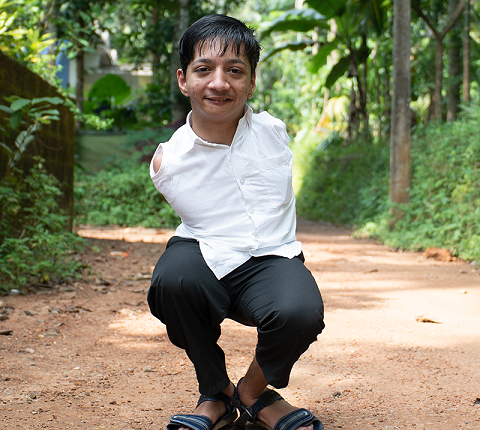 As Patron, Archbishop Desmond Tutu has announced on behalf of the KidsRights Foundation the finalists for this year’s International Children’s Peace Prize, the 17th annual edition – highlighting the remarkable achievements of youngsters fighting courageously for children’s rights across the world.

A shortlist of three finalists has been selected by a panel of experts from over 169 nominees from 39 countries, reflecting the impact and significance of a global recognition that offers the winner a worldwide platform of hundreds of millions to promote their work.

Each year the prize has been awarded by a Nobel Peace Prize laureate, and in 2021 Kailash Satyarthi, the 2014 laureate, will declare the winner of the Nkosi statuette along with a study and care grant for him or her to obtain an education. The recipient will also receive a project fund of €100.000, half of which will go to the winner’s theme, with half invested by KidsRights in other projects of other young changemakers fighting for children’s rights.

The hybrid ceremony will take place on November 13th in the Hall of Knights in The Hague, and livestreamed so that the winner’s message can reach a global audience.

Announcing the finalists, Archbishop Desmond Tutu said: “This year’s finalists are worthy of any in my 13 years as Patron of the International Children’s Peace Prize, the world’s definitive youth prize with so many famous previous winners. What magnificent examples this year’s finalists are to youngsters, and indeed people of all ages around the globe. They show, through their values and determination, just what children can achieve in campaigning to improve the rights of others worldwide.”

This year’s shortlist features hugely impressive nominees from India and the UK / Netherlands.

Muhammad Aasim is a 15-year-old disabled boy from India who is inspiring youngsters with disabilities around the world to continue their education. Christina Adane is a 18-year-old girl born in the Netherlands to Ethiopian parents, and now living in the UK, who has made a name for herself fighting food injustice. Vihaan, 17, and Nav Agarwal, 14, are two brothers from Delhi, India who are committed to reducing pollution, at a time when the eyes of the world are on the COP26 Climate Change Conference.

A picture containing person, child, young Description automatically generatedMuhammad Aasim is growing up in the small Indian rural village of Velimanna in the State of Kerala. Born with no arms, Muhammad Aasim uses a wheelchair as his 90% physical disability makes walking difficult. Muhammad Aasim led a 450km march over 52 days in his wheelchair in the battle for his village school, which only previously covered the lower, primary level, to be upgraded to a high school. He filed a case before the Kerala State court, participated in dharnas (protests), and raised the profile of the issue. In 2015, the government of Kerala granted the upgrade, and as a result of Muhammad Aasim’s efforts, the number of students in the school has increased from 200 to over 700. Muhammad Aasim now hopes the Supreme Court of India will rule in his favour.

During the pandemic in 2020, the UK government decided not to extend free school meals during holidays, affecting 1.4 million eligible pupils in England. Christina started a petition A picture containing window, person, indoor Description automatically generatedthat attracted more than 430,000 signatures and convinced the government to extend free school meals over May half-term 2020, which eventually led to the provision of free school meals throughout 2021. Christina is also an active campaigner against the marketing of junk foods, that disproportionately affects people from lower-income households.

Vihaan and Nav founded their youth organisation, One Step Greener in 2018 to prevent pollution caused by waste. Delhi was the world’s most polluted capital for the third straight year in 2020. Three years earlier, Delhi’s Ghazipur landfill collapsed, causing the death of two people, and leading to a major pollution spike, which made Vihaan realise A person and a child posing for a photo Description automatically generated with medium confidencethe link between waste and air pollution, and the harmful effects of methane fires. The brothers’ first initiative was on waste segregation and organising waste pickup drives. From a start point of 15 homes, One Step Greener is now collecting waste from more than 1,000 households, schools and offices, recycling 173,630 kgs of waste up to this year. They have also started planting native trees, reaching 1,000 so far, and continue to strive to increase awareness of the issue, reaching over 45,000 young people through talks and training.

The prestigious International Children’s Peace Prize was launched in 2005 during the World Summit of Nobel Peace laureates in Rome, chaired by Mikhail Gorbachev. It is awarded annually to a child who has made a significant contribution to advocating children’s rights and improving the situation of vulnerable children such as orphans, child labourers and children with HIV/AIDS.

The prize is an initiative of Marc Dullaert, Founder and Chairman of the KidsRights Foundation, an international children’s rights organisation based in Amsterdam, the Netherlands. Marc said: “169 nominations from 39 countries this year demonstrates the continuing significance of the International Children’s Peace Prize, and it will be an almost impossible task for our panel of experts to select one winner from these incredibly impressive candidates. We have recognised the amazing achievements of incredible youngsters such as Malala Yousafzai and Greta Thunberg over the years, and they have gone on to do amazing things in the world. This year’s nominees show the universal issues youngsters really care about right now, disability rights, food injustice and pollution, and they are shining examples for this generation.”

Last year’s winner of the International Children’s Peace Prize, Sadat Rahman, was recognised for his involvement in setting up his mobile app Cyber Teens to stop cyberbullying. He started in one area of Bangladesh and after winning the International Children’s Peace Prize he was able to expand throughout Bangladesh, collaborating with the government and the police to build his organisation, and now all schools in Bangladesh work with the app.

The Nkosi Johnson statuette is of a child pushing a globe, symbolising how a child sets the world in motion. Mikhail Gorbachev presented the first International Children’s Peace Prize, which was posthumously awarded to Nkosi Johnson, a South African boy who brought international attention to children with HIV/AIDS and founded the Nkosi’s Haven home for HIV-positive mothers and children.

Apollo D2D Duathlon 2021 takes a step ahead with Hyderabad Chapter