Ashok Leyland to supply 500 buses to Government of Sri Lanka 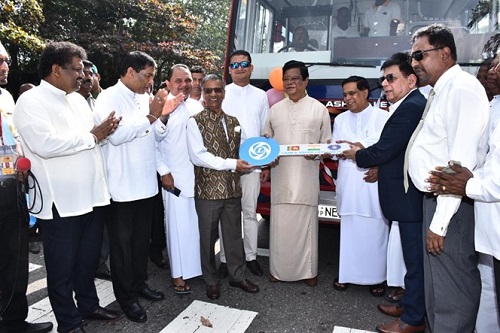 Ashok Leyland, the Indian flagship company of the Hinduja Group and India’s leading commercial vehicle manufacturer will be supplying 500 buses to Sri Lankan Transport Board (SLTB). As a part of the order, the company recently delivered 75 buses to the nation on its Independence Day. The order is a part of a Line of Credit extended by Export Import Bank of India, under the Economic Assistance Scheme of Indian Government.

The first batch of buses in the project was handed over by H.E. Gopal Baglay, Hon. Indian High Commissioner, Sri Lanka to Hon. Bandula Gunawardana, Minister of Transport & Highways Affairs at Colombo on 5th of January 2023. The event was graced by other senior dignitaries including Hon. Cabinet Ministers, Hon. Members of Parliament and Mr. Umesh Gautam, CEO – Lanka Ashok Leyland.

Amandeep Singh, President – International Operations, Ashok Leyland said, “More than 5000 Ashok Leyland buses are currently in operation with SLTB and these new 32 seater buses are expected to be put into operation in rural routes throughout the island. Ashok Leyland buses and trucks are also manufactured in Sri Lanka, and the brand “Lanka Ashok Leyland” is well known among Sri Lankans for their daily transportation requirements.   Ashok Leyland is proud of its long-standing partnership with the Sri Lankan government. We also thank the Government of India for assistance towards strengthening Public Transport Infrastructure in Sri Lanka”.

Sri Lanka Transport Board is the state owned single largest bus transport provider with 110 depots throughout the Sri Lankan island, and operates buses in city routes, hilly & rural routes and also long distance inter-city routes. These buses will help combat the heavily crowded public transport in the island nation, supporting mobility and accessibility in Sri Lanka. Given the diverse routes and conditions SLTB operates in, the new Ashok Leyland buses will be best suited for roads in the rural routes as well.