ATUM Solar Roof – Designed, Innovated and Made in India – for the World – receives a Patent from the United States of America. 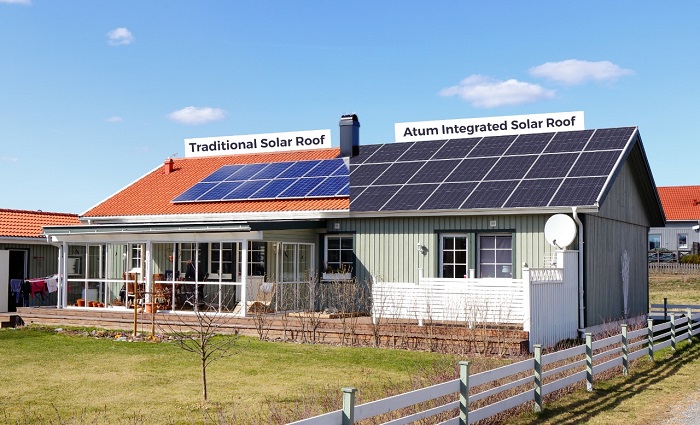 ATUM has also received the prestigious UL Certificate from the National Accreditation Board for Testing and Calibration Laboratory, India.

Hyderabad : Visaka Industries Limited has been granted a patent for its product “ATUM “Solar Roof by the United States of America Patent Office, which is valid for 20 years. The patent has been granted for the invention titled “Eco-Friendly Energy Generating Roofs.”

Since its launch in 2018, ATUM Solar Roof has received patents from India (2020), South Africa (2021) and USA (2021). These countries, which are high on the list of leading solar energy producers and consumers, are seeing a rise in their installed capacities and ATUM is slowly making its presence felt in the industry. An integrated, solar energy generating roof like ATUM can enable distributed microgrids which is the need of the hour, and which will increase the pace of adoption of solar energy in these countries.

ATUM is categorized as a “MAKE IN INDIA” product as all its component parts are developed, manufactured, and assembled in India. ATUM today is installed across cities in India (Tamil Nadu, Maharashtra, Goa, Telangana), Africa, and the Middle East. Today, it covers over 5,00,000 Sq ft which generates over 6000kWp.

ATUM is a roof that generates electricity. It is the world’s first completely integrated, seamless solar roof made with MONO Crystalline PERC cells which makes it 50% more efficient than traditional solar panels. ATUM generates 1KW of electricity using 57 Sqft whereas a traditional solar panel uses over 90 sqft of traditional solar panels. It has also received the prestigious UL Certificate from the National Accreditation Board for Testing and Calibration Laboratory, India. ATUM has also proven to be all-weather resistant in Salt Mist Corrosion Testing by the HI Physix Testing and Calibration Laboratory, Pune, India.

ATUM has also received UL Certification as per International Electrotechnical Commission (IEC) standards in USA and Germany. ATUM has also been certified by Campbell Corporation, to take a uniform load of 780 lbs per sqft, a snow load of 2200 lbs, and the jointing mechanism is a patented leak proof system as per American Society for Testing and Material (ASTM) standards. It is a roof which is class A fire rated and designed to take wind speeds of over 150kmph making it hurricane proof.

ATUM is the brainchild of Vamsi Krishna Gaddam, Joint Managing Director, Visaka Industries Limited, who has catalyzed the company’s transformation to becoming one of India’s leading sustainable building materials provider. He is a vocal advocate for adapting ‘renewable and green’ consumption for a sustainable tomorrow. Known for his social responsibility and eco-conscious business approach, Mr. Gaddam aspires to promote the use of green innovations that act as a carbon offset for the masses.

Speaking about achieving this milestone, Mr. Vamsi Krishna Gaddam, Joint Managing Director, Visaka Industries Ltd, said, “Since its launch in 2018, ATUM, the world’s first electricity generating roof, is disrupting the solar energy industry. We have received patents from India, South Africa and the United States of America which are a testament to the product. With the recent UL Certification from National Accreditation Board for Testing and Calibration Laboratory and the use of MONO CRYSTALLINE PERC cells, we have made the proposition even stronger. ATUM is the go-to product for Corporates and Individuals who are looking at solar energy to not only cut their energy costs but also want to use a clean source of power.”