He maybe silent and his moves mechanical but he can pull you a pint without the slightest concern about contamination: meet Beer Cart, the robotic barman serving beer in Seville. 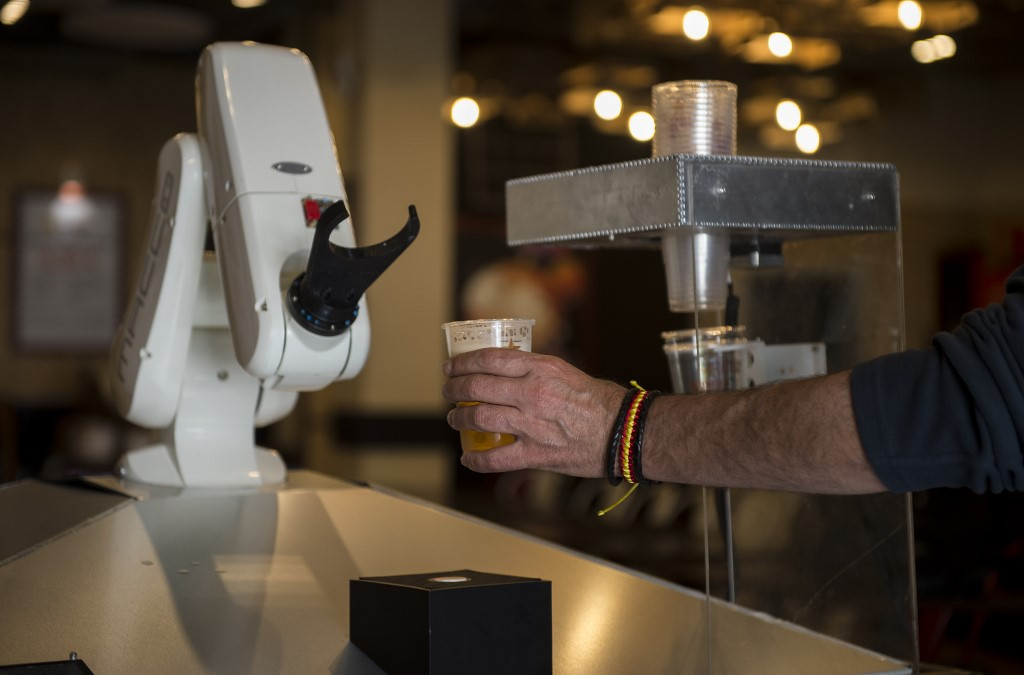 He made his debut when the southern city began enjoying new freedom as Spain eased a two-month lockdown, with bars and cafes in half of the country allowed to reopen their terraces.

Sitting in the middle of the bar at La Gitana Loca (The Crazy Gypsy), the giant robotic arm with a “Captain Hook” pincer smoothly reaches over to a dispenser, takes a plastic cup then spins around to hold it at an angle under the tap.

Gradually straightening the cup as it fills, the robot then places it on the counter for the customer to pick up.

Serving up small draft beers — or canas — for just over a week in the center of Seville, the bionic barman has drawn a steady stream of both customers and curious onlookers.

Spain has lost more than 27,700 people to the virus and taken a very cautious approach to lifting the lockdown, with bar and cafe terraces operating at a reduced capacity and under strict hygiene conditions.

Alberto Martinez, owner of La Gitana Loca where a small 200 ml beer sells for 0.70 euros ($0.75), said he had bought the robot before the epidemic took hold, hoping some mechanical manpower would  increase sales.

But because of the crisis, it was never put into use — although he realized it would be perfect in the new environment where people need to stay apart.

“We thought it would be ideal for reopening in phase one,” he told AFP.

“As the aim is to avoid contact between customers and items (in the bar)… we realized the robot would be good using (disposable) plastic cups to serve beer, so it’s all very self-service.”

Even so, the bar is far from making a profit, with only 12 customers allowed at one time on the outdoor terrace.

“At the moment, it’s not profitable to open for the few seats we’re allowed. Now that we have to compete with other bars we have to do something different,” he said.

“So (with the robot on show) people can see that the bar on the corner is open and that we’re doing something different.”

But not everyone is quite so enthusiastic.

“I think the relationship between the customer and the barman who serves you, who looks you in the eye and watches how the beer goes into the glass has an appeal that’s missing with this robot,” said 33-year-old lawyer Manuel Fernandez.

“I am not in favor of this kind of machine, I prefer to take risks and have them serve me beer the way they’ve done it all my life.”