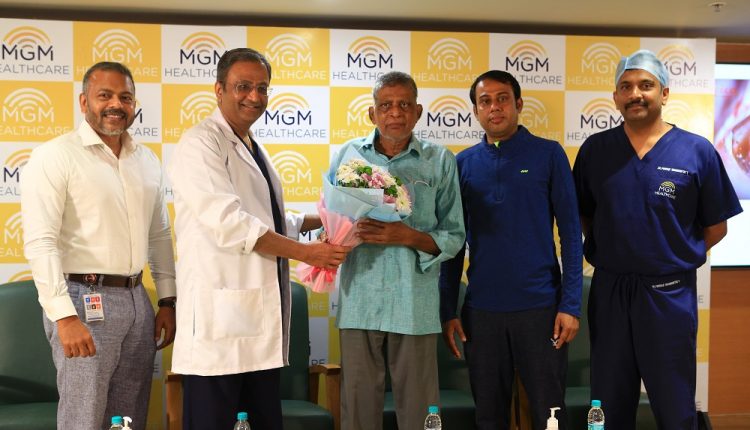 Mumbai: MGM Healthcare, a super-specialty hospital in the heart of Chennai city, today announced that it has successfully performed a rare 10-hour surgery on a 69- year-old Mr. Brajeshwar, from West Bengal and cured his long-drawn hearing ailment that caused constant ringing in both his ears.

Five years passed and the disability from the constant sound became very difficult for him. The severity of his tinnitus scored 4 out of a total of 5. A video consultation was arranged. Dr Sridhar, after a detailed history taking and looking at all his investigations, asked for an MRI to look at the hearing nerves on both sides. The MRI of the brain was done and seen by the neuroradiologist Dr Aarthi Deepesh. It showed that there were blood vessels which were in close contact with the hearing nerves of both sides. A second video consultation was done and the patient and his family were counselled that he would perhaps be helped by surgery – Microvascular Decompression of the Cochleo-vestibular Nerve Complex.

Dr K Sridhar, Director and Group Head, Institute of Neurosciences & Spinal Disorders who headed the surgical team said this is the first time in the world that a Microvascular Decompression of the Cochleo-vestibular Nerve, was performed on both the ears at the same time.

“The patient wanted both sides to be done at the same time as it would be difficult to come again from their town in Bengal. Two days after the surgery, the Tinnitus reduced considerably, and the patient was discharged from the hospital,” explained Dr Sridhar.

Mr. Brajeshwar, from West Bengal, approached the doctors at MGM Healthcare with complaint of constant ringing in one of his ears. A video consultation with Dr. Sridhar ascertained that he was suffering from a condition called the “Intractable Tinnitus”.

The patient and his family were counselled that a surgery can cure his condition. The challenging surgery was performed on December 6.

For patients who are suffering from this condition, it can affect in many areas of person’s life, including relationships, work, and overall health. In some cases, it can weaken the mental health and lead to severe anxiety and depression.

The constant high-pitched ringing and buzzing in ears results in sleeplessness affecting their capability to concentrate.

The success rate of the Microvascular Decompression surgery for Tinnitus is around 80% and it takes a couple of months for the condition to be cured completely. The reason is attributed to the “memory” of the sound that remains ingrained in the Neural pathway, and which disappears only slowly.

Dr Sridhar commenting on the accomplishment, said, “This unique case is a perfect example on how MGM Healthcare is the destination to provide the best treatment with innovative technologies. We have high end equipment with a proper system in place to address each of the patients concerns.”

Harish Manian CEO, MGM Healthcare said, “We are extremely happy that we were able to help this patient who has travelled from approximately 1800 kms away in search of an answer to his extremely disabling problem of Tinnitus which had destroyed his quality of life.”

He further added that the significance of the surgery is the faster improvement in the quality of life that patients with Tinnitus face.

ACEC/MA Announces VHB as a Bronze Engineering Excellence Award Winner for their work on the Dorothy Pond Dredging in Millbury, MA

Take all measures to prevent further spread of Omicron – WHO