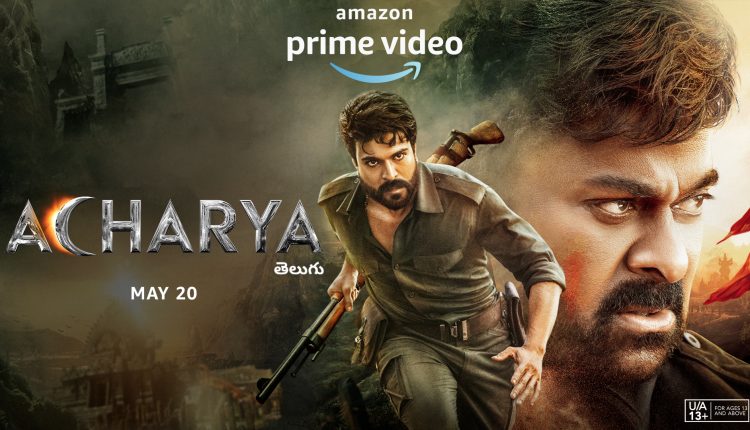 Directed by Koratala Siva, Acharya will stream on Prime Video starting 20th May in more than 240 countries and territories

Prime Video today announces the worldwide digital premiere of Acharya, the Telugu action drama that also makes the first-ever on-screen collaboration of Chiranjeevi and Ram Charan. Fans of the father-son duo have been waiting for the longest to see them on-screen and the wait is finally over with Acharya. Directed by Kortala Siva and produced by Ram Charan and Niranjan Reddy, the film also stars Pooja Hegde, Sonu Sood, Jisshu Sengupta, Kishore Kumar, Regina Cassendra, Sangeetha, Ajay, and Tanikella Barani in pivotal roles. Prime members in India and more than 240 countries and territories worldwide can stream the recently released theatrical film from May 20 from the comfort of their homes.

Acharya is a socio-political actioner, revolving around a middle-aged Naxalite-turned-social reformer who launches a fight against the Endowments Department over misappropriation of temple funds and donations. Acharya shows Ram Charan as the protector of the sacred land of Dharmasthali, which serves as a link between the holy land and a divine river.

Watch the high-octane action drama that brings together the superstar father-son – Chiranjeevi and Ram Charan, starting 20 May on Amazon Prime Video in more than 240 countries and territories.