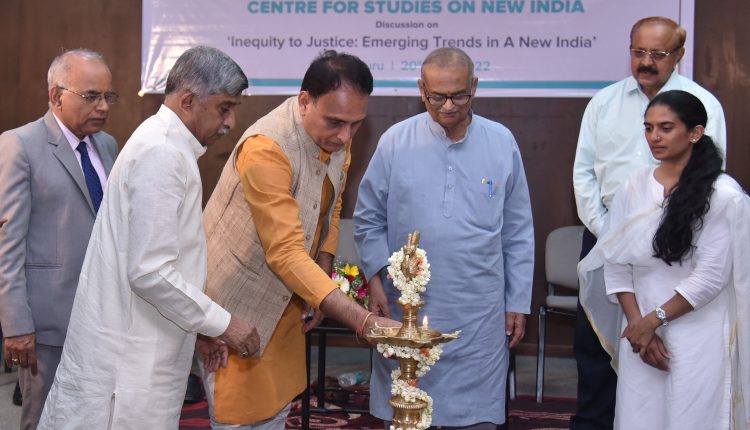 The Centre for Studies on New India at CMR University’s School of Legal Studies organized a talk on ‘Inequity to Justice’ that the country has faced since independence and emerging trends in a ‘New India’. Prof. (Dr.) Rakesh Sinha, Member of Parliament – Rajya Sabha was the Chief Guest who delivered the keynote address. Other dignitaries present on the occasion as Guests of Honour were Shri V Nagaraj, Honorary Secretary, The Mythic Society and Justice A V Chandrashekara, Former Judge – High Court of Karnataka. Shri K C Ramamurthy, IPS (Retd.), Member of Parliament – Rajya Sabha and Chairman of CMR Group of Institutions presided over the function.

In his address to around 200 participants including students and staff members from the school of legal studies at CMR University, Prof. Rakesh said that the fulcrum of quality education has shifted from North India to the South in Bengaluru. “The Centre of Studies on New India is contributing to the objective of resurrecting India’s civilisation and CMR University is the first to start a Centre for studies on New India”, he said. He elaborated on the diversity of India and its rich culture. “The New India calls for revolution of culture and ideologies. There is also an economic revolution as we see it currently. Vitality has been infused in the Indian system. We have to fight against the forces who are disruptive of the ideas of equality. We are here to establish the glory of our civilisation”, said Prof. Rakesh in his keynote address.

The objective of establishing the Centre for studies on New India at the School of Legal Studies in CMR University is to study a New India that not only seeks to be self-reliant, but also to be a significant contributor to global peace. The centre attempts to pursue a variety of meaningful activities in order to achieve this purpose. “As an institution seeking academic excellence, the centre will conduct crucial research and other related activities including publication of books, videos and other similar material so that the burning issues related to the development of the country reaches the common man”, said Shri Ramamurthy, Chairman of CMR Group of Institutions. “India is a vishwa guru now and we are proud about it. We have a New India that respects our partners and is helping our neighbours. The world is recognising and honouring us for this”, he added.

Referring to Swami Vivekananda’s clarion call for a New India, Shri V Nagaraj said, “There has been inequality in social, political and economic spheres; this must stop in the revival of a New India.” He reflected on the philosophy of the whole manifestation of the universe being inter-connected. “For good governance and a corruption-free nation, the people of the country must feel transformed as transformation comes from the fraternity. The whole nation must feel one”, he pointed out.

The Centre for Studies on New India will also organise collaborative programs with top institutions in the country towards successful achievement of its objectives. The centre also seeks to emphasise the great advantage accrued to our country. It aims to ensure that the country receives the kind of recognition and respect that it deserves in the global arena.

Kia announces its entry into India’s EV market; to bring EV6 to India in a limited quantity