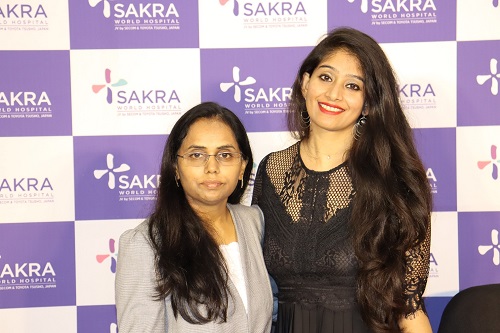 Bengaluru: Adding another feather in the success stories of treating patients and improving their quality of life, doctors at Sakra World Hospital, one of the leading hospitals in Bengaluru, removed 222 fibroids from a uterus of a 34-year-old, while preserving her uterus completely. Ritika Acharya, a journalist, former TV anchor and an aspiring author, suffered from abnormal menstrual bleeding owing to multiple fibroids in the uterus of different sizes and had completely distorted the anatomy of the uterus and were discovered during the surgery.

Uterine fibroids are non-cancerous growths, made up of muscle and fibrous tissue, and can vary in size and shape. The symptoms include pelvic pain, abnormal menstrual cycles, at times even abortions, premature delivery, bulge in the tummy, urine and motion disturbance. These fibroids sometime go away by themselves, however, when left untreated, can grow in size and in numbers, resulting in worsening of the symptoms and causing further complications including anemia and infertility.

In case of Ritika, upon diagnosis, her uterus was found to be enlarged about 8 months pregnancy size and showed a bulge in her lower abdomen. To remove those fibroids, she needed Myomectomy (surgery). This was led by Dr. Shanthala Thuppanna, Senior Consultant & Head-Obstetrics & Gynaecology, Sakra World Hospital and her skilled team of gynecologists, ably supported by Anesthesia team, nursing and supportive staff, and helped in removing 222 fibroids in total, which included a large cauliflower shaped fibroid measuring up to 20X20X10 cms and many others fibroids of different sizes, weighing 2250 grams in total.

Elaborating the complexities of the surgery, Dr Shanthala Thuppanna stated, “Uterine fibroids are usually common in approximately 40 – 50% women, however, only few will have symptoms. In Ritika’s case, she was anemic with heavy bleeding despite practicing yoga daily and maintaining an active lifestyle and had waited for about a year to undergo the surgery due to Covid-19 pandemic. Her fibroids, of various sizes like a large cauliflower shape located below the urinary bladder and ureter and numbers, were spread throughout the left side of her uterus, and very near to important structures in the abdomen which made her surgery complicated since the fibroids appeared like a bunch of grapes one after the other. We were able to remove all these fibroids in her uterus that appeared compressed in the MRI scan, without any complications with a four-and-a-half-hour surgical procedure.

Post her successful surgery, Rithika’s recovery was uneventful.  While thanking the doctors, she said, “For the past two years, these fibroids had been growing inside my body while the symptoms went unnoticed. It still sounds surreal that as many as 222 fibroids were there in my uterus, that made my stomach look bloated and left me in unbearable pain. My heartfelt thanks to Dr Shanthala and the entire clinical and nursing staff at Sakra World Hospital for explaining every bit of the procedure and giving us the best clinical advice while undergoing the surgery. The professionalism with which this Japanese run hospital works gives you the confidence that you are well taken care of.” Stating the irony of getting cured in a Japanese hospital after having visited the country in 2019 and planning a vacation in 2022, Ritika further added, “A wanderlust at heart, I feel a deeper connection with Japan now and this time, I will make sure that I visit the snow in Hokkaido and bathe in the natural onsen while taking care of my health, and never to ignore even the smallest hint that my body tries to give me. I’m happy to be back on my feet now and ready to explore the world.”

Common exercises or stretches every child must do

Sony redefines excellence in imaging with the introduction of the new FE 70-200mm F2.8 GM OSS