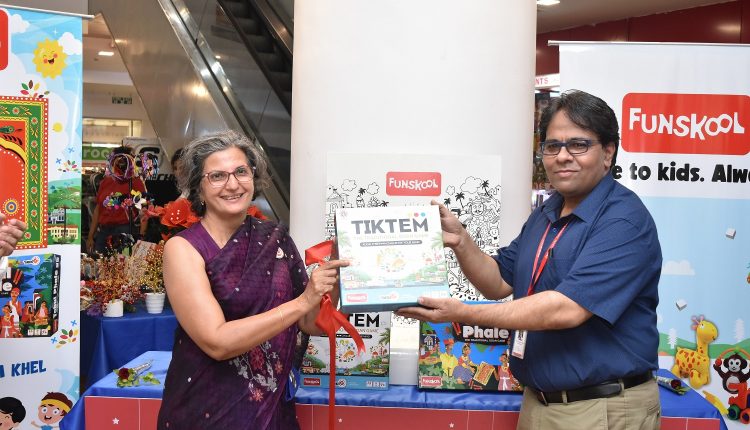 Mumbai: Funskool India, India’s leading toy manufacturer continue their effort to modernize and bring back the glory to indigenous games through their ‘Traditional Toy Series’. The latest additions inspired from the Goan culture and legacy was launched on 17th December 2021 at Panaji’s Caculo Mall in the presence of Ms. Heta Pandit, Vice Chairman, Goa Heritage Action Group and a distinguished author, along with other esteemed guests.

“With the entry of modern games and gadgets, the mode of entertainment for the youth of today is being redefined every day. It is important for our children to get connected to tradition and culture, and what better means than the traditional toys and games?” said Ms. Heta Pandit, VC, Goa Heritage Action Group.

Tiktem and Tabul Phale have their origins in Goa and have a primary role in defining the childhood of an entire generation of the state. These legacy board games, which were extremely popular in ancient Goa has played a pivotal role in building strategy, focus and calculations skills amongst kids. Even with technology overpowering, these games played using pebbles and shells (guno and Shipi in Konkani) are seeped heavily into the local, regional, and cultural nuances of its surroundings.

Tiktem, is a two-player game which is beneficial to the tactical thought process of children. It encourages strategical thinking and improves the intelligence quotient / IQ at a young age. Tabule Phule is also a game originated in Goa and is a fusion of Chess and Ludo. An extremely popular game in Goan households, it consists of wooden board, rounded on corners with motifs and decoration. Once the Tabul is rolled the players strategize the movement of their pawns and aim at nothing less than victory.

Promoted by the MRF group, Funskool India has been leading the efforts to bring back the traditional/ indigenous toys to Indian homes. Funskool has earlier converted traditional Indian outdoor games such as Kho- kho, Kabaddi, Chathuranga and Gilli danda into board games, and introduced puzzles of traditional Indian heroes and Panchtantra tales as part of the Traditional Series.

Funskool India also has a range of their own brands such as Giggles, Fundough, Play n Learn, and Handycrafts. In addition to the inhouse brands, Funskool India also markets a whole range of international toys from Hasbro, LeapFrog, Tomy, Ravensburger and Siku, besides housing licensed products from Disney, Warner Brothers, Nickelodeon, etc.

Why pension planning at a young age is beneficial for your retirement?