G Square Group is the largest Land Aggregator and Promoter Company in South India. The company runs free medical camps in the suburbs of Chennai 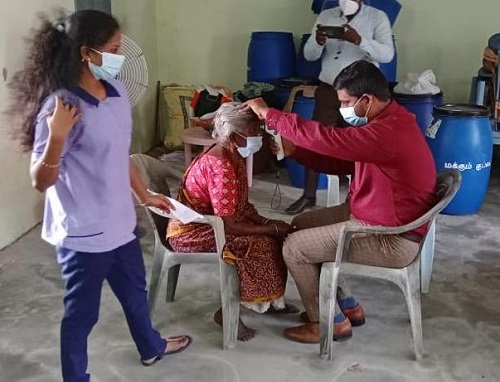 Chennai: G Square Group is the largest Land Aggregator and Promoter Company in South India. The company runs free medical camps in the suburbs of Chennai In this regard, a free eye examination and surgery camp was conducted at Unamancheri (near Vandalur) and Kolathur (near Sriperumbudur). This was followed (Sunday 26.12.2021) by a free eye examination and surgery camp at Vallakottai village near Sriperumbudur. Arrangements for this were made by the GSR Square Corporate Social Responsibility Committee (CSR Team). Vallakottai panchayat leader D Manimegala inaugurated the event. Vice President K Siva Ethiraj took the lead. Thiagarajan from Vallakottai, Anbu and many others were present.

The camp was conducted by Praveen Krishna and Vasumathi Vedantham team of Radhatri Nethralaya doctors of Chennai. Of these, 142 visually impaired were examined and 44 were selected for the surgical press. In addition, spectacles were provided free of charge to those in need of over 70 years of age. All costs were borne by G Square.As per the G Square – CSR Team Officer’s statement, these medical camps would be held every Sunday in each area.

G Square also launched its first community service project in Umanancheri.. Following this, free eye treatment camps were held at Kolathur and Vallakottai. Services would be carried out in all areas where G Square corporate work takes place reassuring the social responsibility the organization possess. Initiatives would be taken to publicize this to the public. It is noteworthy that the camp was highly appreciated by the locality hailing from villages surrounding Vallakottai. Moreover, social distance was observed and people wore helmets keeping in mind of the looming corona fear.