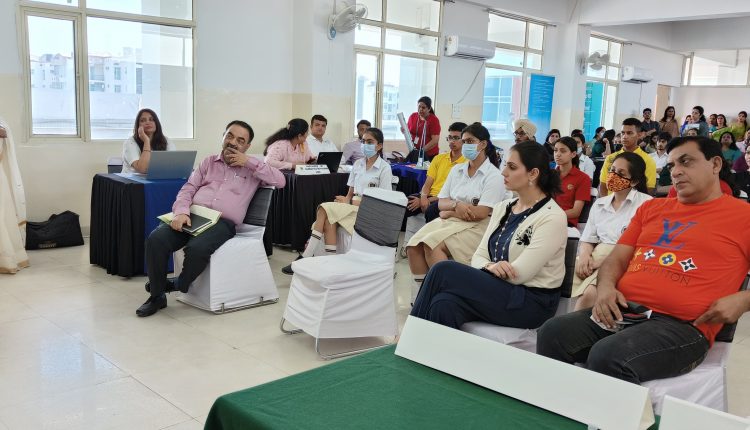 Gillco International School Mohali organised a Mega Physical Career Fair in which more than 500 students participated from grades 8 to 12 to help them make informed career decisions. Registrations were also open for students from the other schools.

The career fair achieved a cult status which saw the presence of 60 delegates from more than 40 prominent European Universities across Canada, Australia, Europe, and US. students and parents actively participated in one-on-one counselling with the Delegates and Universities of their choice. They had insightful and healthy discussions about admission modalities, scholarship programs and other details of the relevant courses.

Ms. Jai Gill said, “It was a golden opportunity for all the students to engage in erudite interactions with professors of different universities. There are so many cases of frauds and knavery by charlatans who cheat students of their money under the pretext of getting them admissions in foreign universities. The career fair helped students get a hang of the how the admission processes in these universities take place which will empower them.”

Ms Ruchi Sharma proposed the vote of thanks to the Guest of Honour and University delegates for gracing the occasion. She said, “Right guidance and career advice can make the future of students bright and prosperous. Fruitful and enriching interactions took place which will bring out positive results. We are delighted that this fair was a grand success and we hope to organise such fairs in the future for the welfare of the student community.”

Mr Tarun Gupta coordinated the entire event and welcomed all University Delegates. It was the first of its kind of fair in this region, students need to know the entire process before they select the University for higher study, our initiative will help them.

Surabhi Dewra, Founder of Careerguide.com inaugurated the event and also welcomed all University Delegates. Ms Surabhi Dewra shared her valuable insights on the New Age Careers and the 21st Century Skills. She lauded school’s efforts in conducting the Career Counselling initiatives and free psychometric assessments for students. Previously, GIS had also arranged one-on-one counselling sessions, more than 15 Virtual Career Webinars and workshops for students. It had propelled GIS to the number 1 position in Punjab in Career Counselling leaders 2021, ranked by the Education World.

6 reasons why you’ll relate to every story of Modern Love – Mumbai on Amazon Prime!

Champions of Tomorrow, a Tata Tea Jaago Re Initiative presents the finals of season 2