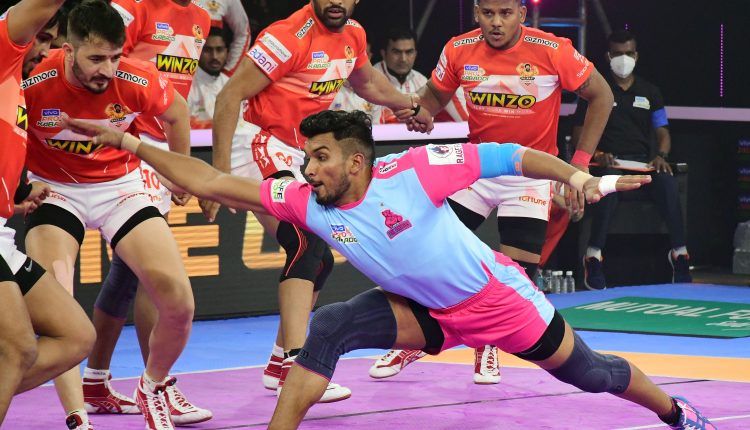 Bengaluru :Gujarat Giants’ defence proved to be too hot to handle for Jaipur Pink Panthers as the Season 1 Champions succumbed to a 34 – 27 defeat in the opening match of VIVO Pro kabaddi League Season 8 Day 2 at The Sheraton Grand, Whitefield Bengaluru. Girish Maruti Ernak secured a HIGH 5 (7 tackle points) and was ably accompanied by teammate Parvesh Bhainswal (4 raid points) as Gujarat secured an important victory to open their campaign.

Jaipur, despite matching blows for most of the match, didn’t have the raiding strength to a well-oiled Gujarat defence but will take positives from a tactically-fought Kabaddi match.

The match started as expected with both defences thwarting the raiders. The first ten minutes of the match saw no multi-points raids despite both sets of raiders struggling to make an impact. The first momentum shift of the match came courtesy a brilliant tackle by Gujarat’s left corner Girish Ernak who pinned Nitish Narwal on the floor from a seemingly difficult angle. Riding on the energy, Rakesh clinched a 2-point raid to inflict the first ALL OUT on the Pink Panthers in the 10th minute to make the scores 13-17 in Gujarat’s favour.

But the Pink Panther quickly clawed their way back into the match, with new recruit Arjun Deshwal impressing in the raids. Gujarat’s Rakesh missed a Bonus Point in a Do-or-Die raid and that handed the advantage to the Panthers. Jaipur capitalised to get their first ALL OUT with 2 minutes to half time and reduce Gujarat’s lead to just one point. The first half ended with Gujarat in the lead at 19-17.

The teams traded blows early in the second half with Jaipur raider Arjun Deshwal securing his Super 10. Despite the best efforts from the raiders, there was nothing to separate both sides, with both defences keeping it tight. With 6 minutes remaining in the match, the scores were tied 25-25. Gujarat’s left corner Girish Ernak secured his HIGH 5 (5 or more tackle points) but the advantage kept see-sawing. At the other end Sandeep Dhull matched Ernak’s exploits with bold tackles from the Jaipur left corner.

Ravinder Pahal secured an important tackle in a Do-or-Die situation for Jaipur Pink Panthers and that proved to be vital in handing advantage to Gujarat. Parvesh Bhainswal then followed it up with a successful tackle for Gujarat to inflict an ALL OUT on Panthers in the final minute to open up a 6-point lead and eventually win the match.