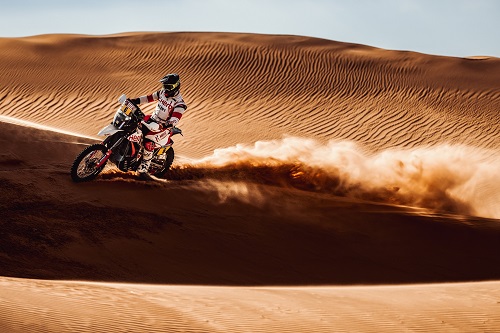 Bengaluru: Hero MotoSports Team Rally, the motorsport team of the world’s largest manufacturer of motorcycles and scooters – Hero MotoCorp, continued their consistent performance at the Dakar Rally 2022 with a strong result in the seventh stage.

Joaquim Rodrigues was in great form and he finished the stage in the sixth-place. The rest day prior to this stage allowed him to recover from his crashes earlier in the rally, where he had hurt his back.

Aaron Maré started strong and was successful in leading a pack of 4-5 riders through a long section of heavy dust and rocks. However, a small navigation error towards the latter end of the stage cost him some time. He finished 18th in the RallyGP class.

JRod and Aaron now sit at the 16th and 17th positions respectively in the overall RallyGP standings after seven stages.

Stage 7 started from the capital city of Riyadh and offered 400+ kms of special stage and an additional 300 kms of liaison, before finishing at the bivouac in Al Dawadimi. The entire stage consisted of fast sections, but often without any tracks to follow, thanks to the heavy rains that washed them out completely.

The next stage will be the longest overall stage of the rally at 828 kms, with close to 400 kms of racing, and the remaining in liaison sections. The opening 200 kms of the stage will all sand and dunes. The rally will reach Wadi ad-Dawasir post the stage.

“The stage had very difficult navigation, especially after the refueling. We often had to stop and try to find the route as many were washed out. I took my time, and was able to find my way through the stage without losing too much time. I am happy with this result and we have 5 more stages to go, so I am going to take it one day at a time, and focus on getting my Hero Rally 450 to the finish line each day.”

“I started the stage pretty well, and was able to catch up to some of the riders before the refuel point. After refuel, it was quite rocky and dusty, and it became quite difficult to manage the navigation. I was leading the stage quite a few times for a pack of 4-5 riders, but it meant that every time I would make a small mistake, I would have to go back into the dust again. Finally, I found some rhythm and was pacing ahead up until around 300kms or so, where I lost quite some time searching for a particular waypoint. It was a disappointing end, but I’m learning from my mistakes, and looking forward to making up for the lost time in the next stage.”

Manoj-Amritha dazzle in grand finale of Dance vs Dance Season 2, claim the title