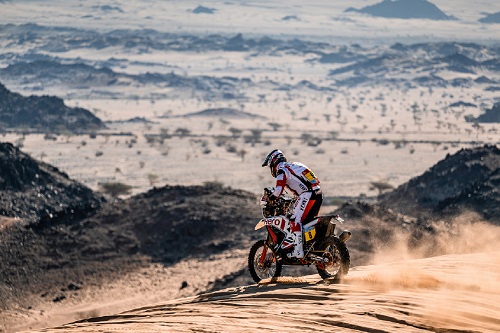 Bengaluru Hero MotoSports Team Rally, the motorsports team of the world’s largest manufacturer of motorcycles and scooters – Hero MotoCorp, achieved a strong result in the second stage of the 2022 Dakar Rally with both riders finishing within the top 10 positions.

Hero MotoSports Team Rally riders – Joaquim Rodrigues and Aaron Maré – delivered an inspiring run in the long stage 2 and posted good results with JRod finishing in sixth place and Aaron in the 10th place in the Rally GP class.

After a difficult stage 1B where he lost considerable time, JRod managed to push his way back to the top on January 3rd. Astride the powerful Hero Rally 450, his much more confident run helped him move up to the 18th position in the overall rankings.

Aaron Maré continued to grow in confidence, and delivered yet another solid stage to strengthen his position in the overall rankings table, moving one place up to the 9th position.

Stage 2 of the race was an exceptionally long one, starting at Ha’il and traversing over 791 kms to reach the bivouac at Al Qaisumah. With more than a quarter of the 339 km special section lined with chains of dunes, this stage presented the competitors with a taste of what the rest of the race will look like. Navigating through the day’s winding and undulating sandy tracks, dune ridges, and ridge crossings was quite a task.

In Stage 3, the rally will present an equally difficult 368 km special section with complicated navigation around numerous intersections across the long sand and soil mixed terrain. The riders will leave from Al Qaisumah early in the morning and will return to the bivouac after completing the stage.

“It was a really good day for me – almost like a reward – after having lost a lot of time in the stage 1B. I was able to put up a good pace right from the beginning of the stage, and was able to catch up with the riders ahead of me. The bike also performed really well, and that helped me a lot. Two stages are done, ten more to go.”

“I am really happy with how the day unfolded for me. Some of the late starters caught up with me around refuel, and it was really fun to ride with them almost till the end. It was also good to learn how the other competitors are riding, and to work with them and get a good pace going. I’m happy with my results, and hope to continue the steady run!”

A World Of Flavours At Your Doorstep

Nua addresses the monthly-acne problem, with its…