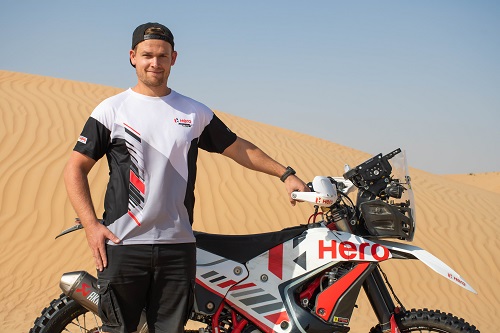 Bengaluru: Hero MotoSports Team Rally, the motorsport team of the world’s largest manufacturer of motorcycles and scooters – Hero MotoCorp, today announced a change in its rider line-up for the Dakar Rally 2022.

Hero MotoSports rider Franco Caimi, a five-time Dakar participant, will not be able to compete in the 2022 edition of the Rally due to an injury that he suffered in Dubai recently. Initially expected to be fit in time for the Dakar, Franco has elected to sit out the rally to ensure full recovery ahead of the Abu Dhabi Desert Challenge in March 2022. This would have been Franco’s first Dakar in Hero MotoSports colors. He joined the team in April 2021.

Replacing him for the Dakar Rally only will be Aaron Marè from South Africa. This will be his second appearance at the Rally. Aaron is an experienced rider and has been consistently demonstrating his skill and speed recently.

Following an illustrious early career across Europe and the USA, Aaron has been racing in the deserts of Dubai since 2016. His career highlights include podiums and wins at the UAE Baja Championship, Dubai International Baja, and Emirates Desert Championship. He also won the Desert Storm Rally 2019 in Jaisalmer, India.

Aaron has had a strong run in 2021, winning the UAE Desert Championship and finishing fourth at the Abu Dhabi Desert Challenge, one place behind Joaquim Rodrigues, who will be his teammate for the Dakar.

This will be the sixth time at the Dakar for Joaquim who finished fourth in the 2021 FIM Cross-Country Rallies World Championship. The duo of Joaquim and Aaron will take on the challenges of the Dakar astride the powerful Hero 450 Rally and an expert team beside them.