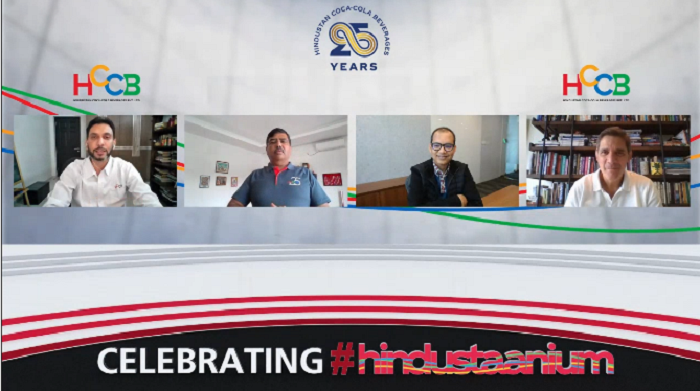 Hyderabad: Hindustan Coca-Cola Beverages (HCCB), one of India’s top FMCG companies, today marked 25 years of its inception in a function organized virtually, keeping in mind the pandemic. Shri K T Ramarao, Hon’ble Minister for Municipal Administration & Urban Development, Industry & Commerce, IT, Electronics and Communication congratulated the company, its suppliers, partners, distributors, retailers, and employees on behalf of the state of Telangana. HCCB’s mega factory is sited at Ameenpur, near Hyderabad, and the factory has been operational in the state since 1998. Telangana is also one of the largest markets for HCCB.

In his congratulatory message to the company, Shri K T Ramarao said, “Telangana values your gesture and your presence in the state. We are amongst India’s most progressive states with very progressive policies for the industry. We understand that industrial growth and development done in a sustainable manner is important for the progress of people in the state. Telangana is home to some of the most big and famous corporate names in the world because of our policies. We would like all of you to be the ambassador of our state. While we want HCCB to invest more and more in Telangana, we also welcome other players to come and establish their presence. I must also congratulate all of you for taking the mission of planting 25 lakh trees to celebrate the milestone of 25 years. A green environment and a green ecosystem is the need of the hour. There cannot be a better way to mark the occasion. I am also glad to know that you are partnering with the Ameenpur Municipality to establish a more refined solid waste management system in the area, on the occasion of your 25th anniversary and I appreciate that. My best wishes and congratulations to the entire team.”

Thanking Shri K T Ramarao for his noble gesture on behalf of the people of the state, Chairman and CEO, HCCB, Neeraj Garg, said, “a company of the scale and size of HCCB gets built by a lot of people coming together, and lending their hand. So, I am thankful to each one that touched HCCB and shaped it. We tremendously value the support and encouragement that we receive from the state and are committed to making additional investments and towards partnerships for the growth and development of the people in the state. I thank the Hon’ble Minister for taking time out and being a part of the 25th anniversary celebration function of HCCB.”

HCCB was incorporated 14th February 1997 with the simple aim of making beverages for the India of the twenty first century. Since then HCCB has come a long way in being able to serve 25 lakh retailers, 3,500 distributors and 6,500 employees. 250,000 farmers grow the agricultural produce that HCCB uses in making its products. The company is headquartered in Bangalore and its operations are spread in 22 states, 3 UTs and 376 districts in South, West, and Eastern India. Through its 15 factories spread across India, it manufactures and sells 60 different products in 200 different sizes across 7 categories. Its products include some of India’s most loved beverages – Minute Maid, Maaza, SmartWater, Kinley, Thums Up, Sprite, Coca-Cola, Limca, Fanta, the Georgia range of tea and coffee etc.

Lifestyle celebrates the season of joy and bloom with launch of new Spring/Summer collection!