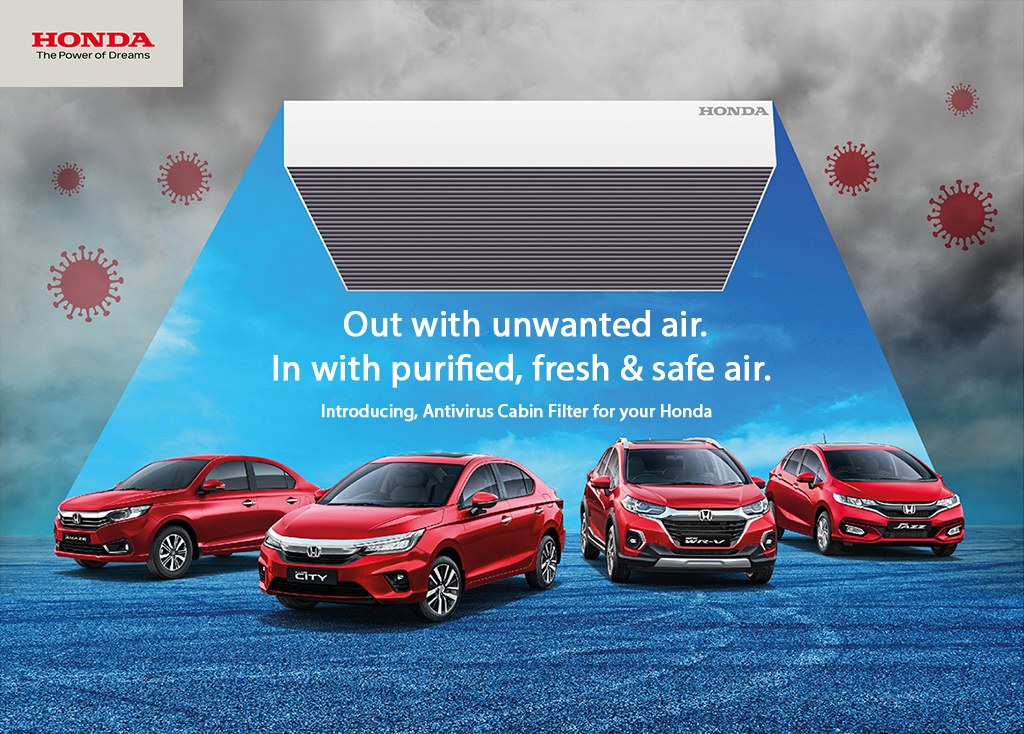 Chennai: Honda Cars India Ltd. (HCIL), leading manufacturer of premium cars in India, will now be offering in its cars an innovative Antivirus Cabin Air-filter which is highly effective in capturing a wide range of harmful germs, allergens and even viruses that cause significant health problems.

The Honda Antivirus Cabin Air-filter was developed in cooperation with Freudenberg, a global technology group that strengthens customers and society through forward-looking innovations, and is offered as a new Honda Genuine accessory, an alternative to the standard Honda pollen filter. This new cabin air-filter provides active protection by significantly reducing the concentration of viral aerosols. This is achieved by unique multi-layer design that effectively filters, captures and suppresses harmful environmental gases as well as inorganic and biological particles and aerosols. In terms of mitigating risk while traveling in motor vehicles, the Honda Antivirus Cabin Air-filter offers one of the best protections available.

Commenting on the announcement, Mr Rajesh Goel, Senior Vice President and Director – Marketing & Sales, Honda Cars India Ltd said, “With increasing concerns around germs, viruses and cabin air quality, it is our conscious effort to provide an active solution and a defense mechanism to mitigate possible health hazards caused by compromised air quality. This Anti-allergen & Antivirus Cabin Air-filter is a fine example of Honda working diligently with its suppliers towards delivering a product that improves the health and safety of driver and co-occupants of the car. We expect the demand for such protective solutions to increase rapidly in future.”

In order to reduce the infection-related risks in the vehicle cabin, it is generally recommended to increase the fresh air supply as it reduces the concentration of aerosols. In re-circulation mode, removing viruses from the air largely depends on the efficiency of the filtration system and the air exchange rate.

The first microfiber bio-functional layer coated with the active substance of leaf extract effectively inactivates allergens along with bacteria and prevent them from being released into the cabin air. Other layers of the Honda Antivirus Cabin Air-filter capture most viruses, ultra-fine aerosols, dust and pollen while the layer, made of activated carbon, is responsible for the adsorption of harmful acidic gases, pollutants such as PM2.5, and particulate matter.

Viruses usually spread through droplets which are produced when the affected individuals sneeze, cough or breathe; and can remain infectious on surfaces for hours or even days. Wind disturbances, temperature changes and humidity can make these particles become airborne again, at which point they can be picked up by the filter. The fine particle filtration layers in the Antivirus Cabin Air-filter provide improved protection against virus transmission as compared to standard filters. The new Honda Antivirus Cabin Air-filter can trap viral aerosols (droplet nuclei significantly below 5 μm) and an innovative second step inactivates almost 100 percent of the captured viral load via a bio-functional layer-coated active substance of leaf extract.

All Honda Cars’ dealerships across India can supply and fit this new Antivirus Cabin Air-filter which is now available for all recent Honda models.

Now get high-protein and nutritious plant-based Chicken Nuggets and Chicken Keema in the Pink City of India!