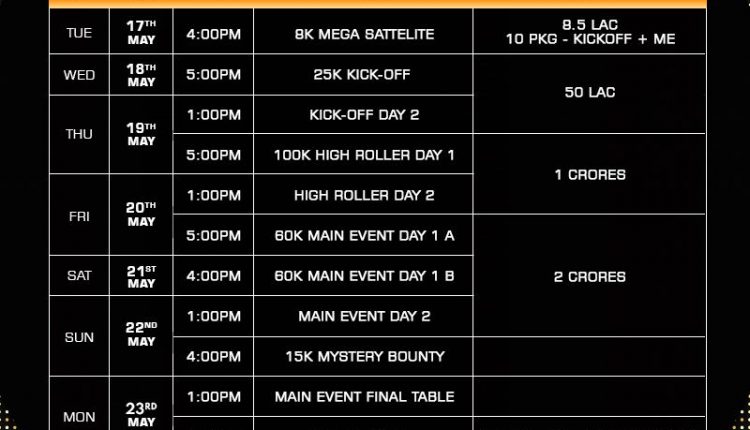 At Casino Vegas By Big Daddy

New Delhi :  The India Poker Championship (IPC), India’s biggest and most popular poker tournament, presented by Spartan Poker, which has been operating on the offshore casinos of Panjim, Goa since March 2010 will be hosting the tournament for the first time in Casino Vegas by Big Daddy, Nepal. The IPC this year already has over 250 confirmed participants and 10+ celebrities from the film and TV industry who will play to win the championship and India’s 1st Phygital trophies.

The 7 days IPC live event will be held from today, 17th May 2022 until 23rd May 2022. With a prize pool of 3.5 crores GTD, this year’s IPC is a megastacks tournament with high buy-ins and high stakes.

The Indian Poker Championship is introducing India’s first-ever Phygital trophies that will be awarded to the winners of all four main events. The Winners will own a piece of Physical IPC trophies paired with a digital NFT twin. The winner gets to own a digital asset that the winner can take with him/her anywhere using his/her digital wallet. The main event winner will be crowned this season’s “India Poker Champion”.

Speaking on the launch, Mr. Amin Rozani, CEO of Spartan Poker Group said, “We’re excited to host the India Poker Championship, the first of many live events scheduled this year, that will bring together a wide range of entrepreneurs, investors, poker pros, and celebrities to create an enjoyable event. This year the IPC  is more than just a competition, it’s a chance for poker fans to stay, play, and holiday with five-star luxury in Nepal.”

The previous edition of the India Poker Championship was a huge success with record-breaking participation. This edition is expected to be grander and set a precedent for mega poker tournaments in the country.

“Our IPC players are an extremely passionate group of players. We are thrilled to host the IPC at Casino Vegas by Big Daddy Nepal and provide our players with an even more authentic and immersive experience that they will love.”, added Mr. Rozani.

The India Poker Championship has been the country’s premier live tournament poker series since its inception in 2010. IPC hosted its inaugural international event in Colombo, Sri Lanka, in 2013. IPC is now back with its second International event in Jhapa, Nepal. Poker Aces, Celebrities, and a slew of other well-known figures adorn the IPC stage.

Marengo Asia Healthcare pledges to plant 50,000 trees as a commitment to the…