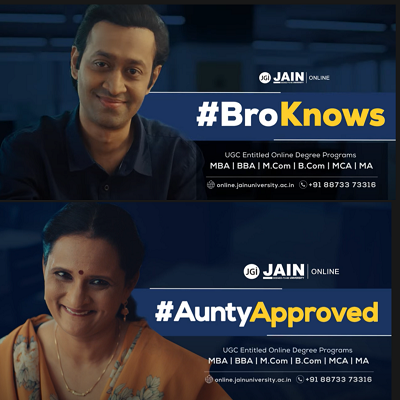 -The campaign is themed around ‘Circle of Influence’

Bengaluru: JAIN Online, a part of JAIN (Deemed-to-be University), a NAAC ‘A+’ Graded University (as per the revised framework) in India, officially announced the launch of its new brand campaign, celebrating the “circle of influencers”. The campaign focuses on two primary aspects that influence decisions regarding online-based learning – a workplace with #BroKnows and home with #AuntyApproved ad films.

Led by two 60-seconder films, the advertisements are further customized to suit diverse platforms with short and topical messages of 15-30 seconds each. The integrated omnichannel campaign, featuring inquisitive office colleagues and probing neighbours, explores how a circle of influencers impacts the choices of an aspiring learner. The brand films conceptualized by Hyper Connect Asia deliver the brand’s core message through comical satire. Since its release, the videos have garnered over 10 million views.

Dr. Raj Singh, Vice Chancellor- JAIN (Deemed-to-be University) shared his thoughts on the campaign, “Generally, a college student or working professional, when choosing an education platform meets with a wide array of choices. There is a huge checklist and a lot of uncertainty with so many new players emerging into the space. Our brand campaign outlines our belief that in a world full of options, the right advice often comes from one’s circle of influence or opinion makers.”

Mr. Kiran Khadke, Co-Founder & Creative Lead, Hyper Connect Asia said, “The pandemic has opened the doors to a pool of options for students, who are looking for credible degree programs online. This has the EdTech sector soaring. We chose the idea of how a passionate professional is always on their toes to stay ahead in the workplace for the first campaign, and the second one explores the scenario where a neighbour’s inquisitiveness is leading to something beneficial. The film tries to give a resolution to their concerns via relative life situations which the audience can relate to.”

In the first film #BroKnows, which is set up in a regular office environment, the character ‘Shekhar’ is notified about an online MBA course his colleague has enrolled for to advance his career. Shekhar is initially suspicious about the degree program that his colleague has taken up, but when he learns that the program is offered by JAIN Online, he becomes concerned that his colleague might have a better chance than him to become the boss. Here’s the link to the film: #BroKnows

The second film, #AuntyApproved, depicts two Indian aunties discussing their next-door neighbor’s son Monty, who has enrolled in an online degree program with a global curriculum from a top-ranked university backed with global mentors and personalised attention. They are astounded at how affordable the program is and how engrossed Monty is in it. Here’s the link to the film:  #AuntyApproved

The 4th Edition of the ‘NMDC Grace Cancer Run’ to be held in 150 countries, on October 10th!