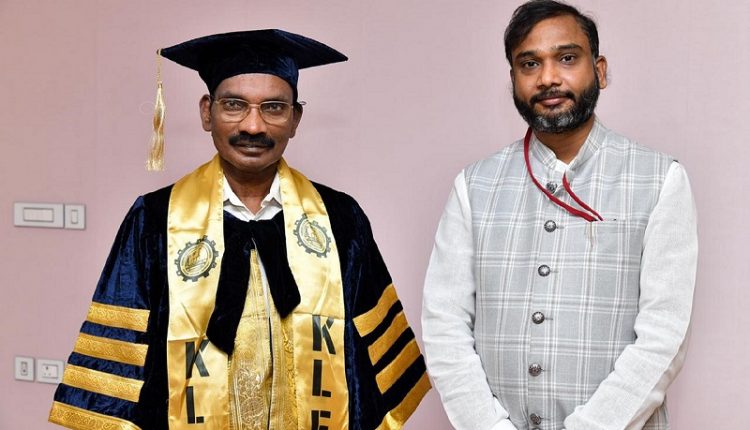 Mumbai : KL Deemed to be University, one of the leading universities in the country for graduation and higher education, has conferred an Honorary Degree of ‘Doctor of Science’ (Honoris Causa) to Dr. K. Sivan, Chairman, ISRO, Secretary, Department of Space, Govt of India for his exemplary contribution to space technology.

On behalf of the KL Deemed to be University, Director, Research, Dr. K. Sarat Kumar presented honorary doctorate degree Dr. K Sivan in Bangalore. Dr. K Sivan, who is currently stationed at ISRO’s headquarters in Bangalore, is regarded widely as an influential voice in the industry. As an inspirational figure in the aerospace engineering landscape in India, Dr. K. Sivan has been conferred with numerous national and international accolades for his contribution in space technology.

Commenting on the felicitation, Er. Koneru Satyanarayana, President, KL Deemed-to-be University said, “As a prolific and influential leader, Dr. K Sivan is inspiration to many. His philosophy on persistence, success and societal welfare aligns perfectly with our university. His recent speech at KL Deemed-to-be University’s 11th convocation instilled a penchant for leadership among our young talented pupils and his contributions motivate our students to learn, grow and master”.

KL Deemed to be University students are encouraged to endeavor onto a path of technology, leadership and innovation. The University provides state-of-the art research facilities to augment its talent’s needs. These include highly sophisticated research, IoT and PEGA labs.

It was a day of inspiring talks at the TEDxOakridgeIntlSchoolBachupally