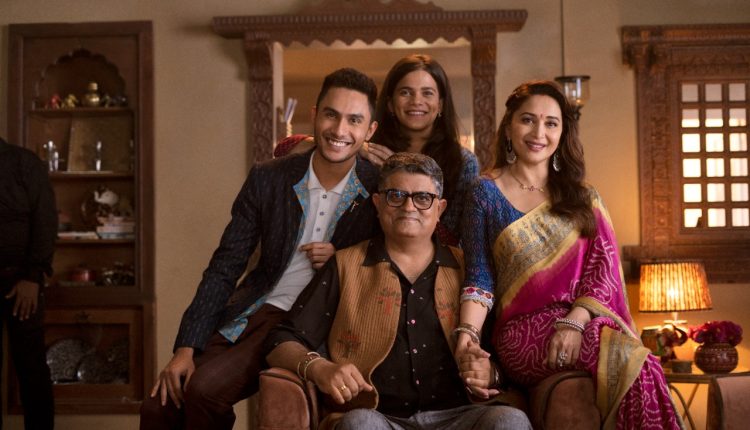 Prime Video’s upcoming original film, Maja Ma is a heartwarming desi family drama, which will make you laugh and at the same time, tug at your heartstrings! Headlined by Bollywood icon Madhuri Dixit, Maja Ma is a story of a middle-class Gujarati family with a backdrop of a traditional festival and a lively, colorful wedding. The film recently dropped its trailer, which has garnered millions of views, and counting. The trailer shows Madhuri Dixit in a never-seen-before avatar, and gives us a glimpse into the life of the Patel family and their friends.

Here’s an introduction to the members of this mazedaar cast.

Portrayed by the very talented Madhuri Dixit, Pallavi Patel is the perfect mother, the perfect wife, and the perfect friend. Her life revolves around the family that she not only loves and nurtures, but also holds them together. She can, and will, do anything to ensure the happiness and wellbeing of her family and loved ones, even if it means sacrificing her own.

Manohar Patel played by Gajraj Rao, is the quintessential papa that you can think of. He has his own set of beliefs, but manages to bend and break them for the sake of his family. He will put his foot down, but also make sure he is always armed with a bear hug and a dad-joke, for when his people need them most. He loves his wife, stands by his daughter, and is proud of the man his son is becoming.

Ritwik Bhowmik’s character Tejas is caring, ambitious, and when he loves someone, he loves hard. Or so we see, when he falls in love with a young American-Indian girl, Esha, he goes the extra mile. Tejas is also a mamma’s boy and is extremely protective of her and leaves no stone unturned to understand and stand with his family, when they are faced by conflicts.

Played by the stunning Srishti Shrivastava, Tara is that girl who is dhaakad, vocal, strong-willed, and fiercely independent. Tara is not shy to voice her opinions., Tara truly portrays her passion for what she believes in. Despite her own struggles, Tara firmly stands alongside her family when conflict strikes.

Barkha Singh plays the role of a modern and free-spirited Esha Hansraj who is an American citizen of Indian origin. She belongs to an affluent family from the States and her parents are conservative in every sense of the word. Madly in love with Tejas, she comes to India to meet her to-be in laws (Patels’) and to start her adventurous roller coaster ride with them.

Bob (Rajit Kapur) belongs to the upper-crust of American society, yet remains Indian by heart. His love for their daughter forces him to reevaluate his beliefs and ideologies to accept Esha’s boyfriend. Though, the conflicts which arise in the film become a dealbreaker for him, where he is willing to call off his daughter’s engagement with Tejas.

Born and brought up in Punjab, Pam (played by Sheeba Chadha) is a first generation American who was married off to Bob when she was young. Despite her American mannerisms and mindset, her values are Indian and traditional. She is one to speak her mind, often coming across as elitist or privileged.

A ball of vibrant energy, Kanchan (Simone Singh) has always been the dominant one in her marriage with Moolchand. Mentally and physically empowered, she is a breath of fresh air who always keeps things light and lively. Besides being Pallavi’s samdhan, Kanchan shares a deep bond with her and is fiercely protective of her.

Moolchand essayed by Ninad Kamat is Kanchan’s husband. He is a bindaas and happy go lucky man. He shares a special bond with Manohar, his samdhi, who he treats like his elder brother, sharing relationship advice to help him spice up his life. He plays a very caring husband to Kanchan.

The calm in between the Patel storm is Pinakin, played by Malhar Thakar in a special role. He acts as a strong anchor to his wife, Tara and her family. He is their support system, their designated shoulder to cry on. A good listener by nature, Pinakin is a trustworthy friend with whom you can share all the problems in the world.

Now that you’ve met the entire Maja Ma family, get ready to sit with your own families and enjoy this colorful entertainer which has love, loyalty, heartbreak, and a lot of family drama! Directed by Anand Tiwari, Maja Ma will premiere exclusively on Prime Video on October 6 in 240+ countries and territories.

CEAT launches CrossDrive, a new all-terrain tyre for SUVs in…