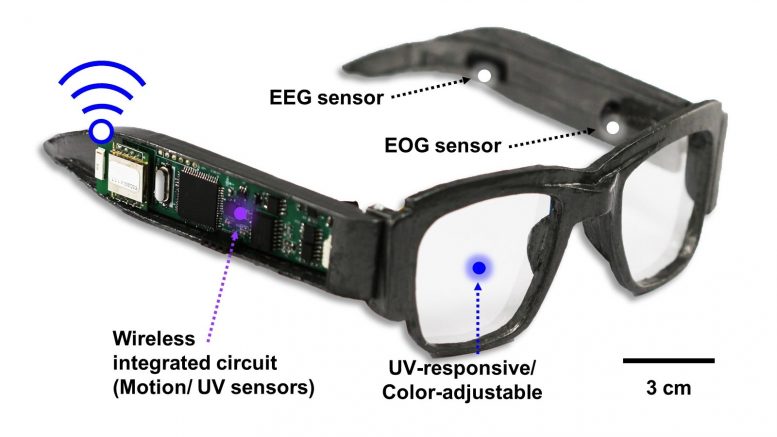 Fitness tracker bracelets and watches provide useful information, such as step count and heart rate, but they usually can’t provide more detailed data about the wearer’s health. Now, researchers reporting in ACS Applied Materials & Interfaces have developed smart electronic glasses (e-glasses) that not only monitor a person’s brain waves and body movements, but also can function as sunglasses and allow users to control a video game with eye motions.

Devices that measure electrical signals from the brain (electroencephalogram; EEG) or eyes (electrooculogram; EOG) can help diagnose conditions like epilepsy and sleep disorders, as well as control computers in human-machine interfaces. But obtaining these measurements requires a steady physical contact between skin and sensor, which is difficult with rigid devices. Suk-Won Hwang and colleagues wanted to integrate soft, conductive electrodes into e-glasses that could wirelessly monitor EEG and EOG signals, ultraviolet (UV) intensity, and body movements or postures, while also acting as a human-machine interface.

The researchers built the glasses’ frame with a 3D printer and then added flexible electrodes near the ears (EEG sensor) and eyes (EOG sensor). They also added a wireless circuit for motion/UV sensing on the side of the glasses and a UV-responsive, color-adjustable gel inside the lenses. When the sensor detected UV rays of certain intensity, the lenses changed color and became sunglasses. The motion detector allowed the researchers to track the posture and gait of the wearer, as well as detect when they fell. The EEG recorded alpha rhythms of the brain, which could be used to monitor health. Finally, the EOG monitor allowed the wearer to easily move bricks around in a popular video game by adjusting the direction and angle of their eyes. The e-glasses could be useful for digital healthcare or virtual reality applications, the researchers say.

The authors acknowledge funding from the KU-KIST Graduate School of Converging Science and Technology and the National Research Foundation of Korea.

Forests Are Thinning Around the Globe Due to Changing Environmental Conditions