MX TakaTak promises a Merry Christmas with the launch of #SantaBanaTakaTak 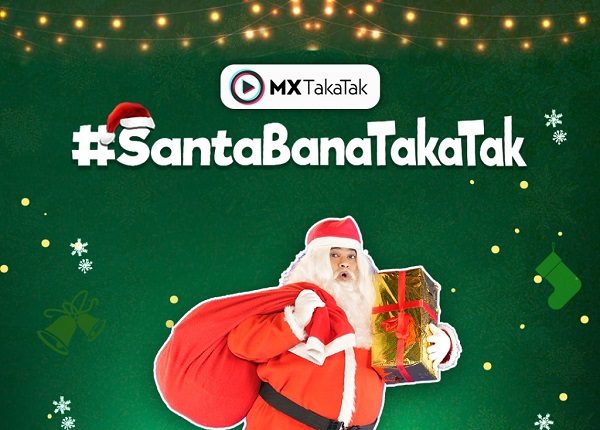 This festive season, participate in the #SantaBanaTakaTak challenge and win exciting goodies from Kiku Sharda, our very own Indian Santa

India’s leading short video app MX TakaTak promises a Merry Christmas for its users with the launch of its #SantaBanaTakaTak campaign as it celebrates the homecoming of Santa Claus. Actor-comedian Kiku Sharda dons the Santa avatar for this exciting challenge and MX TakaTak assures a fun week ahead for its audiences with an interesting line-up of activities for Christmas this year.

From fun user-engaging sessions, fresh MX TakaTak content using Christmas themed stickers, effects and playlists to Kiku Sharda’s LIVE interaction session and on-the spot challenges followed by rewards, MX TakaTak has it all covered to ensure an entertainment-filled week for its users. As part of the campaign, the brand has also announced #SantaBanaTakaTak challenge on the app that offers a huge opportunity for its content creators and users to win exciting presents from Santa’s goodie bag by uploading their unique video telling Santa what’s so Takatak for them this Christmas. The winners of the same will be announced and rewarded by Santa aka Kiku Sharda on 25th December on the platform during a LIVE session. Joining Kiku for these celebrations will be popular Bollywood choreographer Melvin Louis (melvinlouis), Comedian Robin Jindal (Oye_Indori) and actor Rashi Singh (rashi.real).

In addition to this, a Christmas Special Concert on the TakaTak Manch has been planned for 25th December 2021, at 8:30 pm. Hosted by Rohan Asher, the concert will feature performances from leading music creators – Kavana Vasista and Shivangi Singh on Christmas themed songs and regional mashups.

Indian Comedian, Film and Television Actor Kiku Sharda further added, “#SantaBanaTakaTak Campaign is an attempt to Indianize one of the most loved western festivals by bringing home Santa Claus with a desi touch. I am delighted to be a part of this campaign that I personally feel is a great effort by the brand to spread the holiday cheer during these challenging times. I’m looking forward to being a TakaTak Santa and I hope everyone takes part in the #SantaBanaTakaTak challenge and joins us in this fun-filled ride.”

Get set to welcome Santa Claus and have a TakaTak Christmas this year, only on MX TakaTak!