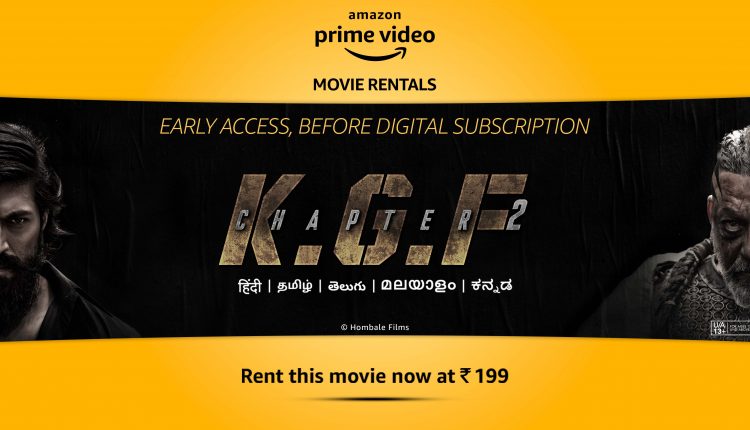 Starting 16th May, fans of the K.G.F franchise can get early access to the blockbuster movie, before digital subscription, with newly launched ‘Movie Rentals’ on Prime Video

An expansion of Prime Video’s entertainment marketplace offering, Movie Rentals allow Prime members, as well as, anyone who is not yet a Prime member, to enjoy early rental access to the latest Indian and international movies, along with a rich catalogue of popular movies from around the world.

MUMBAI — The pan-India blockbuster – K.G.F: Chapter 2 is now available to rent on Amazon Prime Video, India’s most loved entertainment hub. Fans of the K.G.F franchise can get early access to the blockbuster movie, before digital subscription, with Movie Rentals on Prime Video.  Starting today, movie lovers – both Prime members and those who are not yet Prime members, can rent the movie for INR 199 on Prime Video and experience this pan-India blockbuster from the comfort of their homes. The movie will be available to rent in 5 languages – Kannada, Hindi, Tamil, Telugu, and Malayalam in HD quality. In addition to K.G.F: Chapter 2, viewers can also rent the latest Indian and international movies, and from a rich catalogue of popular movies (award winners and franchises) from around the world.

A sequel to the 2018 film, K.G.F: Chapter 1, K.G.F: Chapter 2 follows Rocky whose name now strikes fear in the blood-soaked Kolar Gold Fields. While his allies look up to him, the government sees him as a threat to law and order. Rocky must battle threats from all sides for unchallenged supremacy. He is a hero and a saviour to the people of Narachi. While trying to fulfil his promise to his mother, he must face many obstacles in the form of Adheera, Inayat Khalil and Ramika Sen. Headlined by Yash, the movie also stars Srinidhi Shetty, Sanjay Dutt, Raveena Tandon, Prakash Raj, Rao Ramesh, Easwari Rao, Achyuth Kumar and Archana Jois, among others in pivotal roles. Directed by Prashanth Neel, K.G.F: Chapter 2 is produced by Vijay Kiragandur of Hombale Films.

The launch of Movie Rentals on Prime Video is an extension of its entertainment marketplace offering, and provides customers across India an at-home, theatre-like early access to films. Movie lovers across the country, can gain early access to the latest Indian and international hit movies for rentals, before digital subscription. In addition, Movie Rentals on Prime Video feature titles beyond the ones available with Prime Subscription, thereby, increasing selection and choice for customers.

Consumers will be able to rent K.G.F: Chapter 2 on Prime Video at INR 199 only. The rental destination can be accessed via the STORE tab on primevideo.com and the Prime Video app on Android smart phones, smart-TVs, connected STBs and Fire TV stick. Customers get a 48-hour window to complete the film once playback is initiated. Customers can start watching the film within 30 days of the transaction date.