Reclaiming 2021 as #EntertainmentIsBack, the BookMyShow Way! 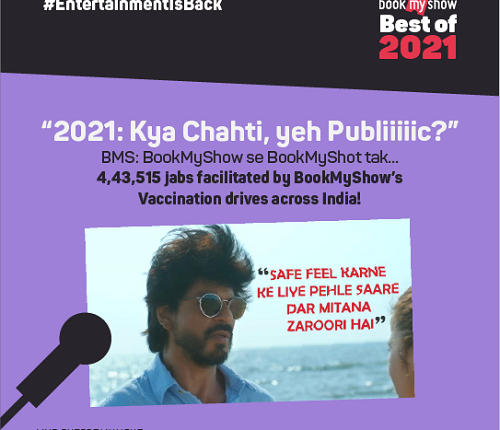 2021 à The year that truly set the tone for the entertainment industry and how! Would you believe us if we told you 12 months ago that 2.9 million people ended up booking their favourite movies over one single 4-day Diwali weekend? Unbelievable, right?! But that’s exactly what happened in 2021 as entertainment via BookMyShow, India’s leading entertainment destination, remained the constant for millions in India!

Whether it was handpicked binge-worthy movies entertaining people in the safety of their homes, live virtual events, special fundraising shows through the second wave or the much-awaited reopening of cinemas, BookMyShow remained at the forefront of entertainment providing Indians with the entertainment they wanted and how they wanted, truly ensuring that #EntertainmentIsBack!

The platform’s #CinemaIsBack campaign that was rolled out earlier this year, invited audiences to experience the long-lost feeling of watching movies on the big screen, popcorn tubs in tow! The festival season lit up the big screens once again, with worldwide blockbusters such as ‘Spider-Man: No Way Home’, ‘Sooryavanshi’, ‘Pushpa: The Rise’, ‘Vakeel Saab’, ‘Akhanda, ‘Doctor’, ‘Kurup’, ‘Annaatthe’ and Marvel’s ‘Eternals’ kicking up a storm at the box office, even as events such as ‘Sunburn Goa 2021’, Over The Top featuring AP Dhillon’s The Takeover Tour enthralled audiences thoroughly. Throughout the year, BookMyShow hosted a vast array of virtual events featuring Vipul Goyal in comedy, Gaurav Kapoor in sporting experiences and more. The latest entrant in the platform’s portfolio, BookMyShow Stream with its handpicked, curated library of celebrated and award-winning films and critically acclaimed titles from across the world introduced audiences to the TVOD (Transaction Video On-Demand) format at scale, enabling consumers to purchase content on a pay-per-view basis.

Since its launch, a whopping 22,51,000 hours of content have been streamed on BookMyShow Stream, with Zack Snyder’s Justice League’ scoring the highest streams.

While BookMyShow continued to meet India’s entertainment quotient, the company also played its part to support the country’s mass vaccination drive, with the entertainment destination using the strength of its technology platform and on-ground services facilitating 443,515 vaccine jabs through its BookMyShow Vaccination drives pan-India.

Commenting on the year that was, Ashish Hemrajani, Founder & CEO, BookMyShow said, “The past 18 months have been unimaginable and straight out of a Sci-Fi movie! It has been particularly rough for the out-of-home entertainment industry globally. Our greatest achievement at BookMyShow during these trying times, was to use our technology and platform strength to extend help and enable rapid vaccination drives all over the country. As we innovated to bring virtual experiences, movie streaming content, offbeat experiences and kept the motto of delivering non-stop entertainment to our customers, we tried and reclaimed our normal lives one step at a time. And today, there is no doubt that #EntertainmentIsBack and it seems to mirror global trends with revenge spending on things and aspects we took for granted. Movie sales are inching towards all-time highs with record numbers for Hindi, Hollywood as well as compelling Regional content. Live events have been opening up steadily with Covid and safety protocols in place across different cities with early indications on sales coming in extremely strong. We promise a blockbuster 2022 for live entertainment and movies and wish to thank millions of our customers for all the love and support through these times! BookMyShow is all set to pay back this love by ensuring we bring in some of the best-in-class entertainment experiences over the course of the New Year. As we remain optimistic of a strong recovery over the next few months, here’s wishing our customers, partners, artists and the entire community a safe and joyous New Year!”

Here’s a look at some of the key trends that entertained India in 2021*:

· BookMyShow clocked a whopping 2.9 million sales over the 4-day Diwali weekend owing to the blockbuster releases after lockdown restrictions were eased

· Post pandemic, the highest number of sales ‘in’ a single day was seen on November 5th, 2021, with 0.91 million tickets sold

· Highest number of tickets sold ‘for’ a single day stood at 1.07 million tickets sold for the day on November 5th, 2021

Top Cities that watched most Movies

2021: Breaking Records & then some more…
Movies that garnered maximum eyeballs

LIVE ENTERTAINMENT: BACK IN BUSINESS!

The Sound Of Entertainment:

Genres that entertained audiences most

·         Cinephiles rented 92% of movies they watched on BookMyShow Stream

The Language of the World!
Most Popular Languages Streamed

Blockbusters which entertained cinema lovers at home on BookMyShow Stream:

·         Zack Snyder’s Justice League sold over 155k streams and was rented 18 times by a single user, making it the most rented film of the year

Studios In Action!
Most Popular Global Studios for films on BMS Stream

Stream Hits, One After Another
Most Streamed Hollywood Hits

Streaming, Day In & Day Out!

Spinny ramps up hiring, in line with its expansionary focus

Spread some green cheer this Christmas with these earth-friendly gifts