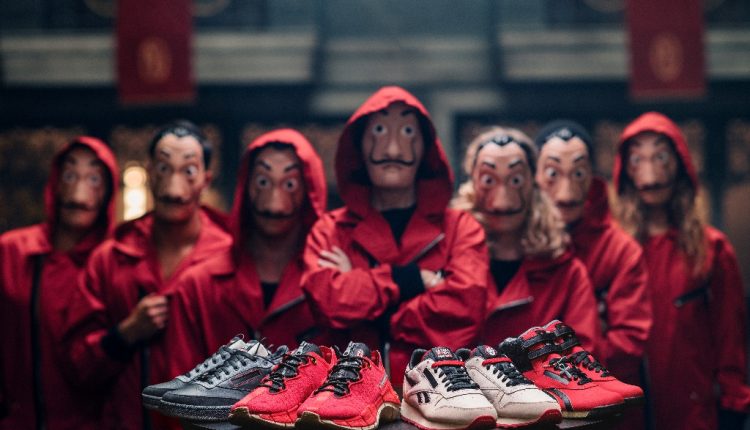 New Delhi : Today Reebok officially reveals its capsule collection with Netflix break-out series, La Casa de Papel, also known as Money Heist. The sportswear brand and beloved series have teamed up to create a collection of footwear to equip fans with the essential gear needed to complete their mission following the end of the series in December 2021.

The collection features four of Reebok’s most iconic silhouettes – the Classic Leather, Freestyle Hi, Zig Kinetica II and Club C. Each pair of shoes features the names of each member of the heist crew allowing the wearer to stand together with the characters. To further bring home the mission of the fifth and final season of the series, which was to “Get the Gold,” some of the footwear incorporates a rub away window box that reveals the highly sought-after gold the crew is seeking.

Additional details on the footwear featured in the collection include:

Classic Leather (INR 7,999/-): Inspired by the masks each member of the heist crew wears to protect their identity, this version of the Classic Leather features a 3D molded side stripe with a texture that mimics the masks’ mustache. The entire upper utilizes materials to mimic the texture and color of the formidable mask.

Freestyle Hi (INR 7,999/-):  Reebok’s first workout shoe made exclusively for women, the Freestyle Hi, gets a makeover from the edgy Tokyo. The sneaker is covered with hints to her strong character including Tokyo’s signature Ankh necklace and a ballistic nylon material on the collar paying homage to the vest Tokyo wears throughout season five. In addition to the rub away window box, the side stripe also has the rub away effect revealing gold underneath.

Zig Kinetica II (INR 10,999/-): This iteration of the Zig Kinetica II takes the heist crew’s red jumpsuits and reworks them to create sleek footwear. The silhouette incorporates details of the iconic outfits with a textile upper, premium stitching and even a zipper detail to mimic the jumpsuit’s zipper closure.

Club C (INR 7,999/-): Rounding out the footwear is a shoe that pays homage to the leader of the pack, the Professor. The tongue features all the signature details of the Professor’s memorable look including a glasses-shaped metal lace dubrae, a tie and a wire detail modeled off the earpiece he wears. The details extend to the backside and inside of the shoe with the inside of the heel tab featuring the name of the gang’s favorite anthem and the lining of the shoe plastered with the Professor’s blueprints.

Each piece of the footwear in this collection is packaged in specialized packaging modeled off the Royal Mint of Spain – the location of the crew’s first heist and the first graphic viewers see during the intro of the show. Inside the shoebox the sneakers are wrapped in red tissue paper symbolizing the origami the heist mastermind, the Professor, creates when he formulates the plan.

Prep, Hydrate & Balance Your Skin With A Range Of Toners From Innisfree India