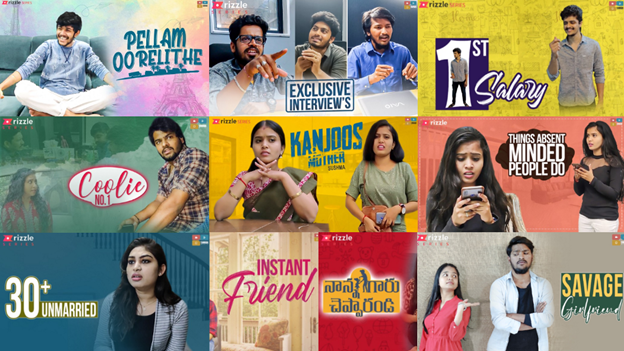 Content consumption in recent times has been on an all-time high, and so has content creation. Rizzle is a platform that caters to both. It has become the go-to platform for aspiring creators to make and post their short series for the world to watch and appreciate.

In this age of mass production of media, where every show and every movie has been watched and discussed to death, Rizzle brings you new, refreshing content everyday. With short series being their major USP, the platform has seen an influx of a variety of shows- whether made by Rizzlers or produced by big media houses- in all genres and languages. Rizzle harbors fresh stories and concepts as a result of the importance this platform gives to creativity.

Here’s a list of 10 Telugu short series that stand as a testament to the same:

This series from the banner of Tamada Media revolves around a husband who desperately needs space. Witness the fun banter between a husband and his wife about married life. The husband loves her, no doubt, but as it often happens when two people live together, he misses having his own space. After much struggle, his stars finally align and he gets the house to himself. How he spends his hard-earned solitude is for you to find out. With hilarious internal monologues, funny anecdotes, and some great acting by Santosh Chintalapudi and Sushma Gopal, Pellam Oorelithe is packed with entertainment.

Also from the house of Tamada Media, this thought-provoking show pitches booksmart against streetsmart. Every Indian kid is familiar with the pressure of performing well in school, so much so that we forget to be kids sometimes. While most defy these restrictions, some kids grow into the same pressure through college and forget to live. Exclusive Interviews tells the story of two such friends, one who has done everything right in his life, and the other who chooses what to do right in a strategic manner. When these two attend the same job interview together, things go very differently from what one would expect.

When you’ve been unemployed a long time, and have gotten an earful about it from your parents every single day, your first salary after finally getting a job means the world to you! That’s what happens with the protagonist of 1st Salary. After scoring a job at 25, he makes a variety of plans as to how he will spend his first paycheck. Everybody in his life also has certain demands- while his mother would like him to donate it to a temple and his father expects him to take up some responsibility at home, his friends expect a celebration! And before he can decide for himself, all his money is gone. Watch this fun series that accurately depicts one’s transition into true adulthood.

When a self-made businessman starts to value money more than people, his associate decides to teach him a lesson by getting his daughter married to Raghava- a mere coolie in the guise of a millionaire businessman! This master plan in turn leads to a bunch of secrets that need to be covered up with lies as they keep inching closer to all hell breaking loose! With all the elements of a quintessential masala flick, Coolie №1 is a great watch, makes you laugh and keeps you on the edge of your seat in a good way!

Every Indian kid is familiar with the lesson in conservative spending that parents usually tend to preach. “Spend less”, “save”, are terms they know well. Kanjoos Mother follows the shenanigans of a parent who has taken it up a notch and now mixes water in ketchup to make it last longer. A frugal spender and a diligent saver, this mother has her daughter doing a face-palm with every attempt at conserving. Sushma Gopal does a great job at bringing these quirky characters to life. It’s a hilarious episodic series that will lift your mood on any given day.

Follow Preethi’s hilarious misadventures as a thoroughly absent-minded woman cruising through life. From repeatedly forgetting keys, climbing up a bunch of stairs because she forgot there’s an elevator, to losing yet another debit card, she has done it all. Having each episode packed with light-hearted comedy, Things Absent-Minded People Do is a great watch for a bored mind.

The perils of an Indian woman who’s over 30 and unmarried can only be imagined by most of us. 30+ Unmarried depicts just that in a fun, comedic manner. While she paid no mind to getting married in her 20’s, she’s more open to the idea at 30. However people around her seem to think it’s “too late” now. From being set up on random dates by concerned friends, to her own reflection telling her she won’t find anybody to settle down with, it’s chaos in her mind. The show deals with the issue in a light-hearted manner, and makes for a great way to spend 10 minutes!

He’s full of shenanigans and she knows exactly how to respond to them. Savage Girlfriend follows this playful couple through their everyday life as partners and as colleagues. It’s got great acting, creatively satiric dialogues, and a non-conventional love story. All of this sums up to 10 minutes of pure, unadulterated entertainment!

Instant Friend is an easy-breezy rom-com that revolves around two best friends, Divya and Kiran, and their attempts at finding love. While Divya has no trouble getting guys’ attention, albeit unwanted, Kiran struggles to get a girlfriend. Their fun banter, hilarious pranks, and their genuine affection for each other makes this show a wholesome watch. Actors Santosh Chintalapudi and Sarika do a great job of bringing the characters to life.

Young, naive, parents’ pet- we all know or have known someone like this. The protagonist of Nanna Garu Chepparandi is exactly that, she doesn’t even step outside her house without telling her father first. With a rigid moral compass, an overbearing father, and all the innocence in the world, watch her tackle life as an engineering student!

There’s more where this came from. Begin your Rizzle Series binge fest now!

“If you want to go farther, go together- Naoko Yamazaki, Former astronaut”