Robotic Neurosurgery for Brain the first time in Hyderabad by KIMS Hospital, a rare milestone achieved

Hyderabad:  For the first time in Hyderabad, Robotic neurosurgery was used to detect seizures centre in a 9-year-old boy’s brain by Dr. Manas Panigrahi, Consultant Neurosurgeon at KIMS Hospitals. It’s a latest advancement in Neurosurgery practice. A robot with image guidance helps in achieving precision and faster neurosurgery. Robot-guided neurosurgery is available in a few cities worldwide. In India, only 3-4 cities have robotic neurosurgery in their practice. 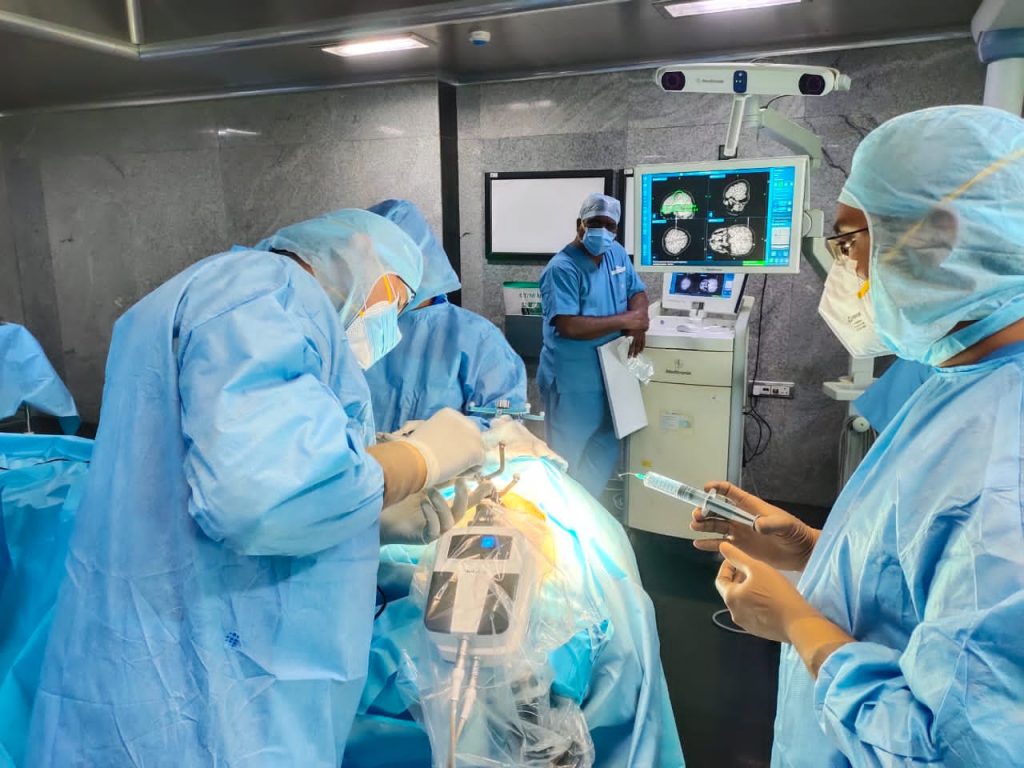 Recently, robotic system was launched in KIMS hospital’s department of neurosurgery. The robotic system helps in various brain surgeries including Epilepsy surgery, stereotactic guided brain tumor biopsy, Parkinson’s disease (deep brain stimulation), Brain tumor surgery to identify important and problematic parts of the brain. With the help of a robotic system, neurosurgeons can operate brain tumor with small opening in skull which helps in early recovery and less pain to the patients.

A 9-year-old boy was brought to KIMS hospitals with uncontrolled seizures in spite of multiple medications. This has been pertaining from almost five years. He used to get 6-7 seizures every day. Because of this, he was not able to attend the school. Rest of the body development is normal.  He was initially evaluated with MRI brain and video EEG by Neurologist Dr. Sita Jayalaxmi (Epileptologist KIMS Secunderabad) but couldn’t localized from where the seizure is starting. For such patients, electrodes have to be kept in the brain to find out seizure onset.  In this patient robotic guided eight electrode placements were done in the brain successfully by Neurosurgeon Dr. Manas Panigrahi to record brain electrical activity which helps in identification of the place from where seizures are coming and further details. This type of surgery is technically quite demanding. The exact location of the electrode is of prime importance. This new robotic system helps in the most precise placement of EEG electrodes.  In India, such treatment is available in a few centers. KIMS hospital is one of the leading institutes in epilepsy treatment in India. And using the robotic system helps in better outcomes for epilepsy patients.

Previously, this procedure was time taking almost 7 hours. Firstly, a frame needs to be placed in the head under local anesthesia and then CT scan and MRI must be done which as little painful procedure. Then after, anesthesia will be given and another frame will be placed for calculation. After this, the surgery used to be undertaken. But now anesthesia will be given from starting of surgery. The patient will not feel any pain in this new procedure where as in the previous procedure; noticeable amount of pain was involved. Previously, this procedure was time taking almost 7 hours but with use of robotic system there were 50 % reduction in the duration of surgery. The new procedure will not cost any more than the previous one. With conventional frames, there was a limitation of the number of electrodes which are placed (6-7 only). But now, any number of electrodes as per the requirement can be placed in the head. With these electrodes, the area where these seizures are originating can be perfectly determined by recording of electrical activity of brain by epileptologist. Once this is determined, whether this part can be removed or not will be decided by the doctors. In this boy epilepsy team have localized from where the seizure is starting and planning for resection surgery in future.  Post final surgery, the boy may be allowed to attend the school and continue his day-to-day activities.

The pros of this new procedure are, it is painless and it is more precise than former one because of the less manual intervention. The time taken for the robotic procedure is also very less. This is robotic guided calculation unlike the previous one which is manually done by surgeons. Because of the use of robots, the biopsy time will also drop down drastically.