Run Virtually For A Cause: ‘The Terry Fox Run’ For Cancer Research

Canadian International School, Bangalore (CIS), is hosting the Terry Fox Run 2020, in association with the Terry Fox Foundation, virtually from 8:30 a.m. onwards on Saturday, October 10, 2020. This year is the 40th anniversary of the Terry Fox Run and is an annual non-competitive charity event held around the world in commemoration of Canadian cancer activist Terry Fox and his Marathon of Hope to raise money for cancer research.  This year, participants will be able to complete the run from anywhere in the world and raise funds for Terry ’s legacy to find a cure for cancer. 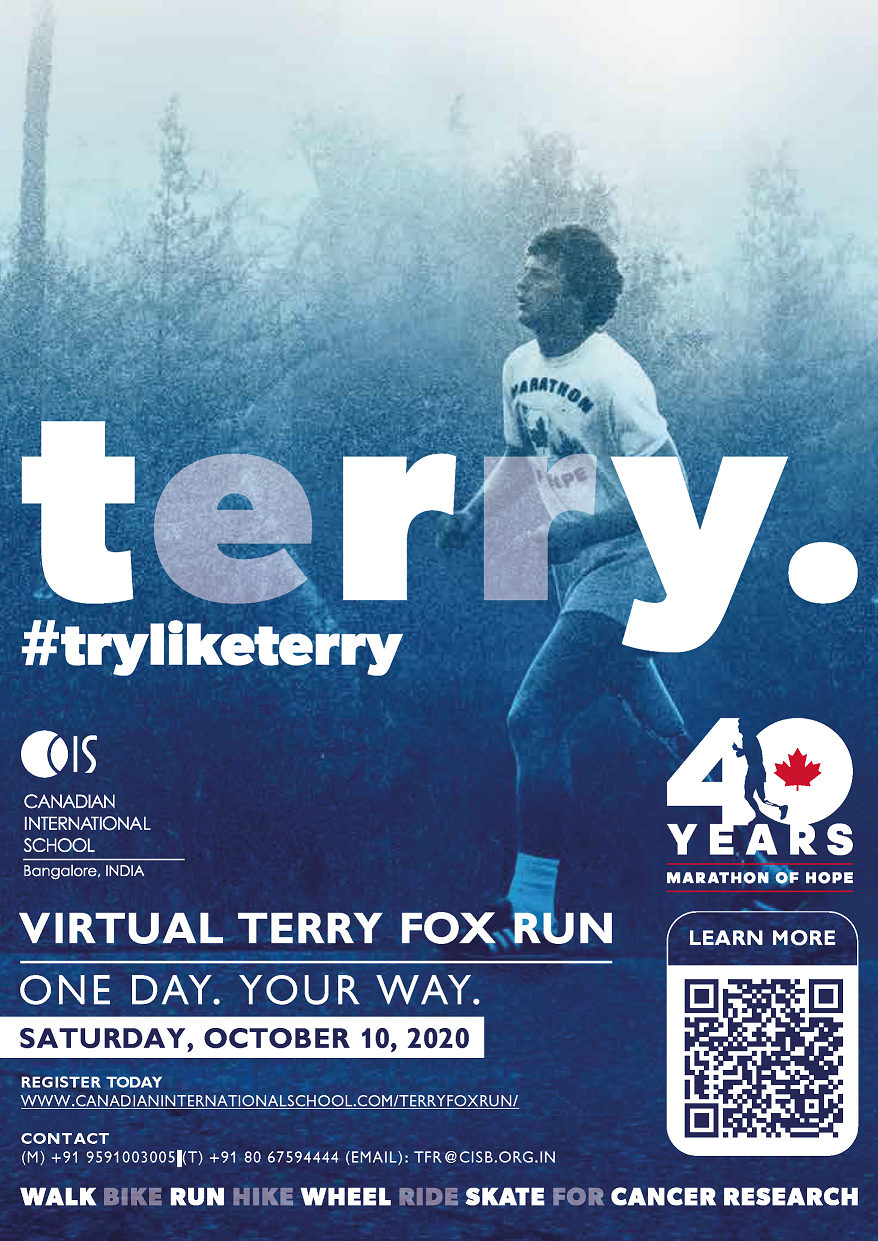 Hundreds of participants from various schools, colleges, and organizations across the country are expected to take part in this 5k run that is free to all who register. This year, because the run will be virtual, participants are welcome to walk, run, skate, wheel, or bike at their own pace around their neighborhoods, local parks or lakes, or even in their own homes if they don’t want to step outside.  Participants can download the free Movespring app and track their activity, then upload a screenshot to receive a free certificate of participation.  All registrants will also receive a pledge sheet to track their fundraising efforts as the goal of the event is to raise money for Cancer research in Terry’s name. Registration is free. However, you can make an online donation to the CIS Ketto campaign and all proceeds will be sent to the Terry Fox Foundation to support their efforts to find a cure for cancer here in India.

“I feel very privileged and fortunate to be part of an initiative such as this and in an innovative way this year. It is a day when we celebrate Terry’s legacy and try to keep alive his dream of finding a cure for cancer. CIS has always believed in contributing to social causes. Through the Terry Fox Run, we join forces to fight cancer,” said Ms. Shweta Sastri, Managing Director, Canadian International School.

Forty years ago, no one in Canada thought it would be possible for a young man with a prosthetic leg to run a marathon a day, every day – but Terry did. This Canadian athlete was brave enough to take on one of the most diabolical enemies known to mankind – cancer. What Terry Fox achieved struck a chord with Canadians and millions of people around the world. Through his efforts, the Terry Fox Run took off and has not looked back since.  Though this year, the event will be a different one, cancer won’t stop for Covid, and neither should we!

You can register at: http://www.canadianinternationalschool.com/terryfoxrun/