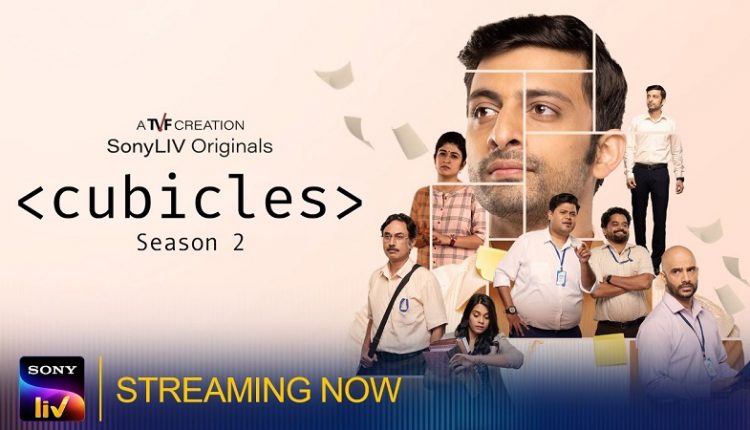 “This world is actually run by people sitting and working in their cubicles.”

The line, an apt evaluation from Piyush Prajapati, the protagonist of Cubicles, potentially summarizes the reality of the global IT sector, where people put their heads into a desktop at a cubicle, synergizing the power to make or break deals. It was not a surprise that the show resonated immediately with millions of aspirants and employees across India, as they connected with the strains and themes that the series explored in its first season. After a hit season 1, SonyLIV and TVF are set to bring an easy-breezy season 2 from 7th January.  Cubicles S2 will see Abhishek Chauhan, Nidhi Bisht, Arnav Bhasin and Shivankit Singh Parihar reprising their roles.

Cubicles traces the life of 22-year-old Piyush Prajapati, fresh from college with big dreams. As he takes up his first job with a leading IT company, he slowly realizes that the reality is not as rosy as he had initially surmised. He falls into the daily grinds of corporate life and slowly gets embroiled in the realities of office politics, cutthroat competition, and the ruthless corporate culture. The second season picks up from Piyush’s assimilation of the harsh reality. However, it’s a mixed bag, which also explores themes like ‘competitors’ on the job ending up as friends.

The short 5 episodes narrative story of everything that drives corporate elves — relationships, personal life, workplace blues, new opportunities, and the challenges of changing equations in professional lives. Will Piyush finally break through the cusps of the mundane, or does a change await him in the corporate realm? Does he cruise through his relationships with his colleagues, or does fate have a whole new set of challenges for him in store?

Cubicles S2 makes for a perfect binge-watch! So, don’t forget to untangle the answers in Piyush’s life from 7th January only on SonyLIV.

SonyLIV believes in realistic storytelling. TVF has certified success in connecting across age demographics with their engaging and relatable stories. They successfully churn out content that speaks about very regular and mundane life events with a dash of colour. The success of the first season of Cubicles called for a season 2. Bringing a show like this cements our aim further of showcasing content that is relatable and homegrown.

What Cubicles does best is bring out the “Hey, this happened to me too!” feeling in viewers. It effectively covers every nuance of a modern Indian workplace — relationships, work equations, competition, opportunities, and changes that build a professional. It also explores the strains that personal lives sometimes undergo under the pressure of work life. The second season keeps the spirit alive and takes the story through a myriad series of twists. We are sure that this will be another engaging watch for our viewers.

Cubicles has been an instant success because of its connect with reality. It shows real instances from corporate lives. The developments and grindings in Piyush’s life resonate with viewers because they find a level of familiarity with him. He is just one in a million people, who nurse dreams of making it big in the IT sector. The second season picks up from where we left off, however, new surprises are in store. Its more realistic and the team has worked very hard to put the new episodes in line. Looking forward to its streaming on SonyLIV.

Why it is important to breastfeed your baby

Clear your time for 7-8-9! Comedy Central is bringing the biggest sitcom shows for…