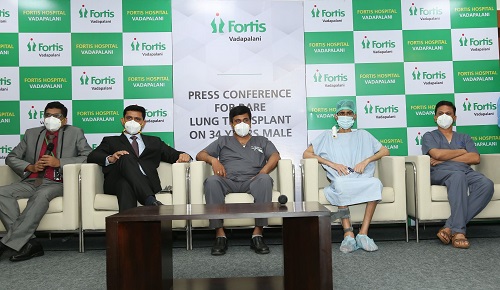 -The patient suffered from multiple co-morbidities: Low BMI, Small chest cavity and multiple chest tube insertions to both sides of the lungs which posed significant challenges to the medical experts-

Chennai: A Team of doctors led by Dr. Govini Balasubramani at Fortis Hospital Vadapalani, successfully performed a rare lung transplant earlier this month on a 34-year-old male. The rare and challenging surgery lasted for 7 hours where both lungs were successfully transplanted to the patient in spite of the multiple health challenges such as small chest cavity, multiple chest tube insertions on the sides of the lungs and low BMI.

The 34-year-old patient from Punjab was presented at Fortis Hospital, Vadapalani, with a rare familial Interstitial Lung Disease (A group of disorders that cause progressive scarring of lung tissue that occurs in one of every one lakh population). The family of the patient had already lost two of its members because of familial ILD. The patient’s Low BMI was the biggest challenge as it was less than the required range for organ transplantation. The average BMI for organ transplant should be 18-32 for the transplant to be successful. The patient was dependent on oxygen support for his survival since past two years and had been in the waiting list of NOTTO for 8 months. The wait for the suitable lung came to an end, post a donor from Madurai. The 29-year-old donor met with a fatal accident and declared brain dead by the hospital at Madurai while he was on ventilator support.

Elaborating on the rare surgery Dr. Govini Balasubramani, Head, CTVS, Heart and Lung Transplant, Fortis Hospital, Vadapalani, said, “The patient was surviving on oxygen support since past two years and used to consume 12 liters per minute of oxygen in a day. He wasn’t able to step out of his home without oxygen support. He was suffering from multiple comorbidities which made the transplant difficult and challenging.  Generally, for his age and height, his BMI should have been 25. Additionally, identifying the correct size of lungs as he had a small chest cavity was a tedious task. Transplantation on patients with low and high BMI might not be a success as there are chances of organ rejection. After his admission at Fortis, we prepared him for the transplant by giving the right nutritional diet, physiotherapy, and altering the medication for his body condition.

Speaking on the clinical achievement, Dr. Sanjay Pandey, Zonal Director, Fortis Hospital, Vadapalani, said, “I congratulate the doctor’s team at Fortis Vadapalani for successfully conducting the first lung transplant within an year of the hospital’s launch. This was possible because of the multidisciplinary approach by team of doctors, including Dr. Govini Balasubramani, Dr. Sindhura Koganti – Transplant Pulmonologist, Dr. Manohar – Critical care and Anesthesiologist, a team of doctors, infection care team, dieticians, and nurses who worked in close coordination and gave a new lease of life to a young patient.”