Taco Bell® Will ‘Swap’ Boring Meals For Its Craveable Tacos 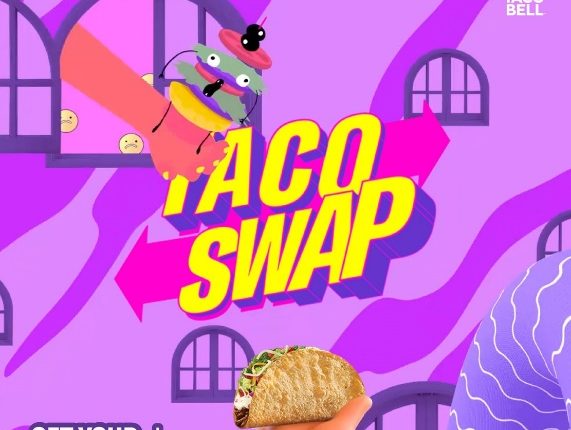 Starting 16th May to 20th May from 12:00 pm to 2:00 pm, fans in India will be able to swap their ordinary meals for a craveable Taco Bell taco — all part of the brands’ international ‘Taco Swap’ campaign across 25+ markets

Whether it’s lackluster lunches or dull dinners, Taco Bell is disrupting what it means to have a less-than-exciting meal with the opportunity to swap the mundane for something más exciting: a Taco Bell taco! Taco Bell is here to help fire up meals again by (theoretically) swapping out the same old burger, pizza of fries for fun, fiery Taco Bell taco.

For those looking for a sign to have one of Taco Bell’s famous tacos, look no further. Taco Bell is inviting fans to swap any ideas of a sad lunch for a Taco Bell taco. By finding the nearest Taco Bell and visiting during lunch hours, consumers can redeem a Crunchy Taco starting on 16th May to 20th May by dine-in or take away from 12:00 pm to 2:00 pm. The Crunchy Taco is a signature product available in vegetarian and non-vegetarian variants, served with chef recommended Pinto Beans & Spicy Ranch Sauce.

Talking about the campaign, Gaurav Burman, director, Burman Hospitality, Taco Bell’s Master Franchise Partner in India said, “Over the years, Taco Bell has created a distinct identity amongst the Indian audience and today, we have a loyal community of taco-lovers across the country. With the Taco Swap campaign, we aim to deepen consumer engagement and encourage consumers to swap their meal for a free taco during the lunch hours. We believe that this campaign will help us induce trials for our Mexican-inspired delicacies and make way into the consumers’ hearts, one taco at a time.”

Taco Swap is the continuation of Taco Bell’s first global marketing campaign, ‘#ISEEATACO’ that began with Taco Moon in May 2021. Taco Bell invites consumers to continue to see tacos everywhere. During this time, boring, plain meals won’t stand a chance and can easily be “traded” for Taco Bell’s flavorful tacos.

Taco Swap giveaways will take place in 25+ markets, at participating restaurants for a limited time.