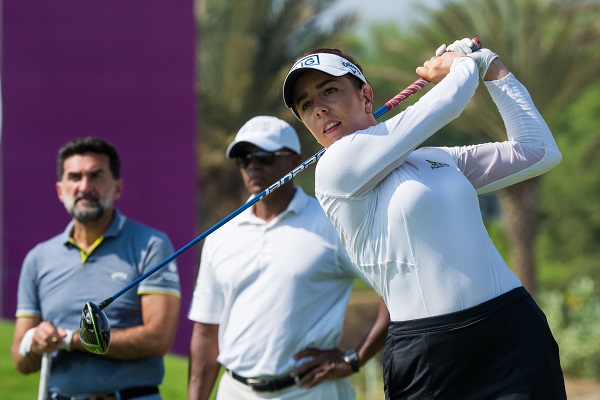 A captain’s performance from Georgia Hall has given the Major-winner’s team a one-shot lead after Day 1 at the Aramco Team Series – Jeddah.

Hall finished that event 13-under-par for her final three rounds – and in going bogey-free en route to a seven-under par 65 appears to have maintained that sparkling form into this week’s contest.

“Bogey-free is always a nice round here,” said Hall, who also shares the Day 1 lead in the tournament’s individual format, with Germany’s Olivia Cowan.

“I tried to take advantage of not a lot of wind, and I still missed a quite few cuts, but I’m happy with -7.”

Hall’s team-mate Diksha Dagar – who missed the cut at the Aramco Saudi Ladies International – wasted no time in making amends today, shooting an opening round 68.

Dakar said: “Today was very good in general. I had a very good start, and we have a very good team. We have a chance and tomorrow we can pick it up and continue playing good golf.”

In playing a key role in helping her team storm to the top of the leaderboard, Maha Haddioui became the first Arabic golfer to lead a Ladies European Tour event after its opening day.

“It was really fun playing as a team,” said Haddioui, a fan-favourite in Saudi Arabia. “I started pretty well but couldn’t keep it up on the back nine. But still, I made a few good pars when I needed to and had a few birdies on the front nine too, so it was nice.”

“I’m enjoying being on this course,” said Ciganda. “The back nine was tricky. There was a lot of wind today and the last few holes weren’t easy, but we did great as a team – when one player was in trouble we had another in good shape. That’s what you want in this type of format. I had a great time with Harang, Leticia and our amateur and we’re ready for tomorrow.”

Olivia Cowan won the Aramco Team Series – London’s team crown back in July. In sitting joint-top with Hall with two rounds to play, the German could now end this year’s run of Series events with a solo win, too. Team Cowan also sit just three behind Team Hall.

Cowan said: “I think we just worked really well as a team. On some of the holes where one didn’t do as well, the other two helped out. We had quite a few birdies which definitely helped. Our amateur is really good to talk to and he’s really chilled out. We all get on really well, so it’s a good team. The most important thing is to have fun out there – and we’re having a good time, which makes us play well.”

The Aramco Team Series – Jeddah is the last of four new $1million team tournaments added to the Ladies European Tour this season and follows events in London, Sotogrande and New York. It continues Thursday and Friday.

For families keen to experience something fun and different – in the spectacular surroundings of KAEC – tickets are available for free, and only require an online registration. There will be a fun-packed fan zone, food trucks and even selfie-opportunities with all the players in the field.