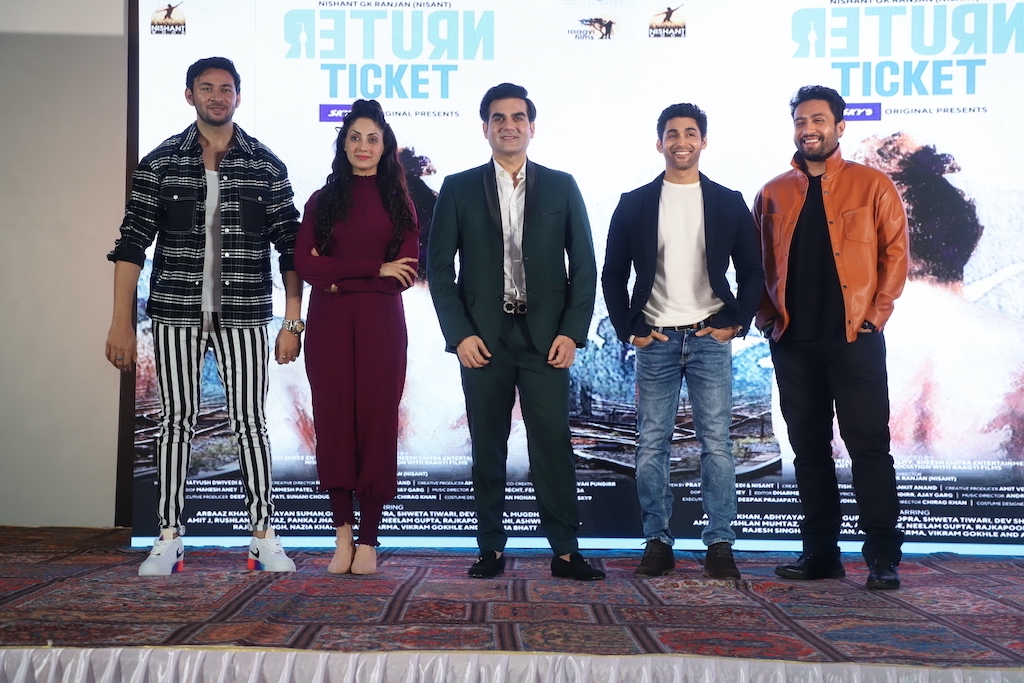 Mumbai: It is said that you get the results of all the deeds done, but what will happen if someone’s deeds come in front of him after 30 years. The film Return Ticket is also based on such a concept. Writer Pratyush Dwivedi and director Nishant GK Ranjan’s film Return Ticket after Thirty Years has a number of characters in the 30-year journey who’ll face a new situation when they encounter one such incident. The teaser poster of the film Return ticket after thirty years was launched in Mumbai last evening. On this occasion ,film star cast Arbaaz Khan,Adhyayan Suman,Gurleen Chopra,Dev Sharma, Ruslaan Mumtaz,Amit J alongwith Neelam Gupta,Aseema Bhatt, Directed Nishant GK Ranjan,writer Pratyush Dwivedi and Rakesh Bhadauria of OTT partner Sky Nine were present.

Produced by Om Shree Entertainment and Reality, Sheesh Chitra Entertainment and Nishant Wood, Return Ticket  is directed by Nishant GK Ranjan under the banner of Raagyi Films and written by Pratyush Dwivedi and Nishant. The film is starring Arbaaz Khan, Gurleen Chopra, Dev Sharma, Shweta Tiwari, Adhyayan Suman, Mugda Godse, Asif Tambe, Amit J Sharma, Neelam Gupta, Ruslaan Mumtaz, Aseema Bhatt, Raj Kapoor Sahi, Ashwini Krishna, Pankaj Jha and Vikram Gokhale.
On this occasion, Actor Arbaaz Khan said that when director Nishant told me the story and the character of the film, I felt that this is an opportunity to give justice to the rape-victim. When I was offered the film, I accepted it. We have often heard that rape victims do not get justice and are considered criminals in the society, so this film and character will help to awaken the society. I am excited with the character of the film, as I will get to experience a 30-Year journey. The character is experimental and we are looking forward to the film.
Director Nishant GK Ranjan said that the story of the film was deep inside me for the last 10 years. I have felt all the characters of the film. The film draws the attention towards the social evil, while it also gives us a good social message. My producer –cum- casting director Chirag Khan has brought together a multicast talent for this film. The film shows a 30-year journey in which the audience will get to see different looks of all the characters. The film’s OTT partner is Sky Nine. The shooting of the film Return Ticket after Thirty Years will start in February Arunanchal Pradesh, Assam, Gujrat and New Delhi. The film’s creative producers Amit Verma, casting director Chirag Khan, executive producer Deepak Prajapat, co creative producer Shravan Pundik , creative director Nitish Srivastava and Ankit Anand, cinematographer Mahesh Aaney, music director Andrin Albrecht and Fernando Noriega, lyricist Shravan Pundirr and Ajay Garg, costume by Gunjan Mohan And the editor is Dharmesh Patel.
Share FacebookTwitterWhatsAppEmailLinkedinTelegram