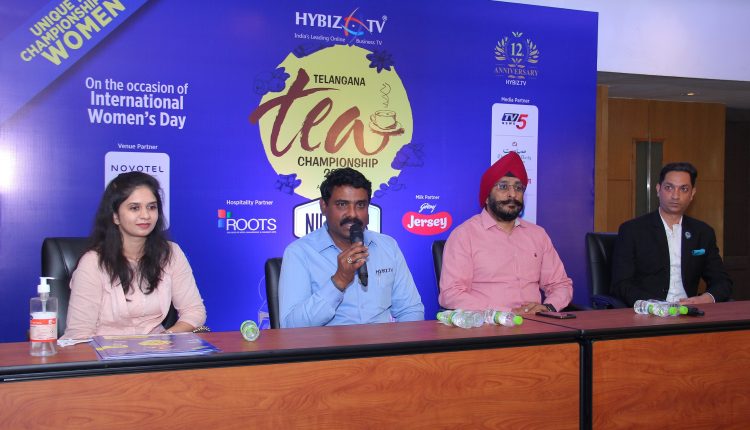 Hyderabad’s Love for Tea Takes a Leap beyond Imagination as The City is All Set to Host the First Telangana Tea Competition.

Hyderabad : Tea is not just a drink for Hyderabadis, it’s an emotion. Few say it’s a love affair and no other beverage in this world can break this relationship. And this love for tea is going to take a leap beyond imagination as the city of Nizams is all set to host its first ever tea making competition at the TELANGANA TEA COMPETITION (TTC).

The unique tea competition is being organized by HYBIZ TV, an online business channel from Hyderabad.

It is the first time in the history of Hyderabad that a unique event appreciating world’s one of the oldest and second most consumed beverage is being organized in Hyderabad. The competition would be held on 6th March 2022 at Novotel HICC.

Telangana Tea Competition welcomes women from all walks of life to participate in the tea making competition and showcase their passion for tea. As TTC is scheduled just a few days prior to International Women’s Day, the event is an exclusive platform for the women of Hyderabad city.

Talking about the origin of the concept of the event Mr. Rajgopal Madishetty, Founder and MD of Hybiz TV said “Water is the most consumed drink in the world and after water; TEA is the most popular drink around the world. Every nation and culture has its own way of presentation and consumption of tea. Be it Japan, America, China, UK or Europe -every country has its own distinctive style of drinking this AMRIT RASS (eternal bliss).

India being a unique country on its own also offers a variety and specialty of drinking and serving the eccentric drink. As we know there are many variations of tea leaves and their floavours, the city of Hyderabad also offers different varieties of flavoursome tea or CHAI as we call it. In fact, tea is an integral part of life for the people of Hyderabad and Telangana. It’s an emotion and to celebrate our feelings, respect, madness and a crazy obsession attached with the magical leaves of tea, 1st time in Hyderabad and Southern India, HYBIZ TV is organising TEA MAKING COMPETITION on 6th March 2022.”

On the other hand speaking about the emotions attached with tea in India, Hybiz TV CEO- Dr. Sandhya Rani stated that “We Indians may be divided by different regions or languages etc but we are all united at heart by our endless love for TEA. Savoring tea is one act that binds us Indians from North to South or East to West. One can definitely say PM to Peon; everyone in this country loves his/her TEA.

Tea is not just a drink for us Indians; it is a matter of pride, an emblem of our tradition and culture, and an art or skill to showcase. To celebrate this undying love for our favourite beverage, Hybiz TV would like to invite you to be part of a unique festival of tea – Telangana Tea Competition.”

All around the world many countries like China, Japan, USA, Russia, Australia, Bangladesh, Malaysia, South Korea, Vietnam, Singapore, etc have been organising festivals to celebrate tea, its making, flavours, and various traditions associated with it. In India, only the state of Assam in the northeast celebrates the tea festival every year. The festival has been acting as one of the main boon for the tourism of Assam.

Mr. Madishetty further said that the winners of the competition would be rewarded with a handsome winning prize amount. “As the event is being organised just a few days prior to International Women’s Day, HYBIZ TV is inviting women from different walks of life to come forwards and participate in the Telangana Tea Competition. The participants would be judged and the winner would be awarded an amount of Rs. 1 Lakh. The second position holder would be awarded a prize money of Rs. 50,000. Whereas, the first and second runner-ups would be awarded Rs. 25,000/- each respectively.”

To honour and appreciate the hard work of women in different sectors of the society, Hybiz TV also every year hosts the prestigious WOMEN’S LEADERSHIP AWARD (WLA) on the eve of International Women’s Day. This year Telangana Tea Competition would certainly set the spirit of the award ceremony as well as Women’s Day. The winners of TTC would be presented with their prize money at the 3rd edition of the Women Leadership Awards to be held 7th March 2022.

It would be quite interesting to see women preparing tea not as part of their daily chore but to win a competition. May the best teetotaler win.

Top 5 Advantages Of Technology Based Learning