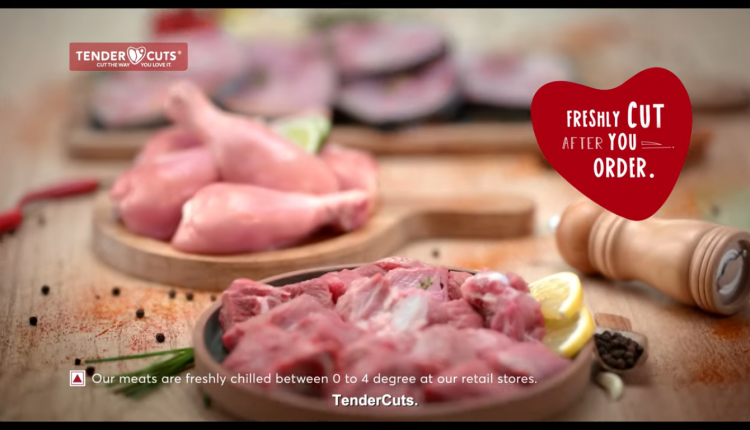 With the major objective of the multi-film campaign banks on humour to spread awareness on freshness of meat and customization of cuts at TenderCuts, the brand is all set to launch a series of commercials, conceptualized by Lowe Lintas. The first advertisement opens with a very suspicious-looking old man standing outside the TenderCuts store with a devious expression on his face. He places an order for mutton and immediately rushes inside only to see the TenderCuts executive putting mutton inside a bag. Upon questioning their claim of ‘cutting fresh meat only after getting an order’, he is informed by the executive that it was someone else’s order, and his meat was yet to be cut.

The second film opens with a husband walking into the house with a bag of TenderCuts in his hands. Almost another instant, the doorbell rings and a TenderCuts delivery person hand over a packet to the husband. Confused, he looks at his wife who informs him that the meat can also be ordered online.

Commenting on the campaign the Chief Marketing Officer – Ms. Aruna Jathar of TenderCuts says, “The entire campaign was developed after careful research, it is beautiful, light-hearted, and memorable stressing on our USPs of “Freshly cut after your order is received” and “Cuts the way you love it”. These are very important for our customers who will love it and remember it.”

Mr. Nishanth Chandran, Founder & CEO of TenderCuts said, “The effort from the inception has been to provide fresh meat and seafood which are antibiotic and hormone-free by establishing direct partnerships with vendors. The online meat market space has grown 3 times since the pandemic and the need for freshness has abundantly grown. We are delighted to launch the first TVC for TenderCuts and we are sure the concept would strike chord with the audience.”

Talking about the campaign idea, Puneet Kapoor, Regional Creative Officer, Lowe Lintas said, “When we first heard about the unique services of TenderCuts, we immediately knew it would make for some interesting and fun advertising. Being a brand that’s all about customer delight the task was to create something that was close to the heart. ‘Cut the way you love it’ sums that up nicely. And the films are all about celebrating the love for TenderCuts, whether it is the fact that they are an omnichannel or that they have the freshest locally sourced meat. Or even the fact that they have such a wide variety of cuts.”

The series of TVCs will be on air over the festive season. It will be promoted in all regional channels across category including sports channels, entertainment and news channels and will also be complemented by digital medium, print and out-of-home as well.