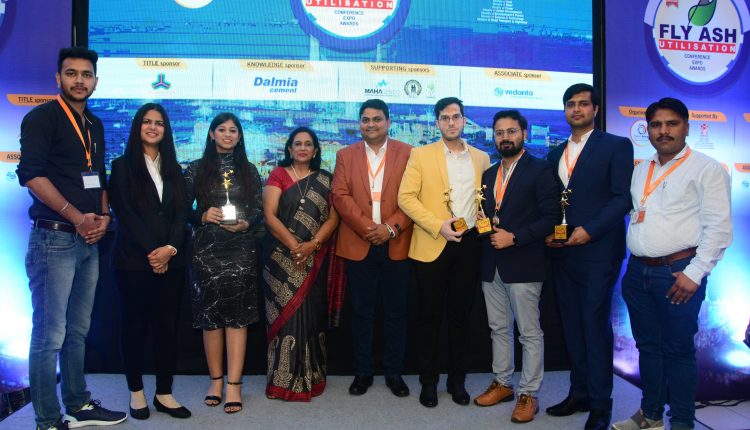 New Delhi : Vedanta Aluminium, India’s largest producer of aluminium, has scored a hattrick of awards at the 11th edition of Fly Ash Utilization Conference Expo Awards by Mission Energy Foundation for efficient management of fly-ash. Vedanta Power Plants at Jharsuguda (Odisha) won in the >=500 MW and <=500 MW categories respectively, and Vedanta’s Chhattisgarh-based subsidiary BALCO won in Captive Power Plant category. Around 160 companies participated in the competition, and Vedanta Aluminium led the way for its significant steps in ensure gainful utilization of fly-ash in circular economy avenues.

Fly-ash is a by-product of thermal power generation using coal, which caters to electricity requirement of Vedanta’s aluminium smelters. The inherent properties of fly-ash find impactful usage in the cement, construction & infrastructure industries, to offer three-fold benefits in terms of cost, quality and sustainability. The company supplies fly ash from its Jharsuguda and BALCO plants to cement industry for the production of low-carbon ‘green’ cement. Besides improving product quality, in cement manufacturing, every tonne of fly-ash used can help save around 700-800 kg of carbon emissions, 4.2 million KJ of energy, and 341 litres of water.

Similarly, Vedanta Aluminium is working with hundreds of local brick manufacturing MSMEs near its operations in Odisha and Chhattisgarh, transitioning them away from mud bricks. Bricks made of fly-ash are not only lighter and stronger than traditional clay bricks, but also play a crucial role in preserving nutrient-rich topsoil from being used as raw material. This amounts to estimated savings of 1.9 metric tonnes of topsoil for every tonne of ash brick manufactured. Besides, ash brick manufacturing is an eco-efficient process, contrary to the energy-intensive process of producing clay bricks in brick kilns that results in substantial greenhouse gas emissions. In fact, for every tonne of ash bricks manufactured, an estimated 5900 kg of carbon dioxide equivalent emissions are avoided. It also makes for a healthier working environment for those involved in the brick manufacturing process.

The company has also entered a long-term partnership with the National Highways Authority of India (NHAI) for building greener roads with fly-ash in Odisha. To find out innovative ways of utilizing this industrial by product, Vedanta Aluminium also conducts technical & business workshops with global waste utilization experts to create greater awareness on the benefits of using fly-ash in cement construction and develop the market for such products. Through these avenues the company has utilized nearly 2.8 lakh tonnes of fly-ash in cement production and supplied 2.7 lakh tonnes for brick manufacturing in FY22.

Speaking about Vedanta Aluminium’s approach to sustainable development, Mr. Rahul Sharma, CEO – Aluminium Business, Vedanta Ltd., said, “With our climate at a tipping point, our mission, as India’s largest producer of aluminium, is to build a tomorrow where the nature thrives, and the future of our next generations is promised. Effective management of industrial waste streams like fly ash through collaborative action between various stakeholders, can result in decarbonizing the entire ecosystem. With the belief that these changes are just innovative science, robust engineering and effective management of resources, Vedanta Aluminium has redoubled its efforts to utilize 100% of its by-products in gainful ways. These awards stand testimony to our efforts in that direction.”

Vedanta Aluminium, a business of Vedanta Limited, is India’s largest producer of aluminium, manufacturing more than half of India’s aluminium i.e., 2.26 million tonnes in FY22. It is a leader in value-added aluminium products that find critical applications in core industries. With its world-class aluminium smelters, alumina refinery and power plants in India, the company fulfils its mission of spurring emerging applications of aluminium as the ‘Metal of the Future’ for a greener tomorrow. www.vedantaaluminium.com