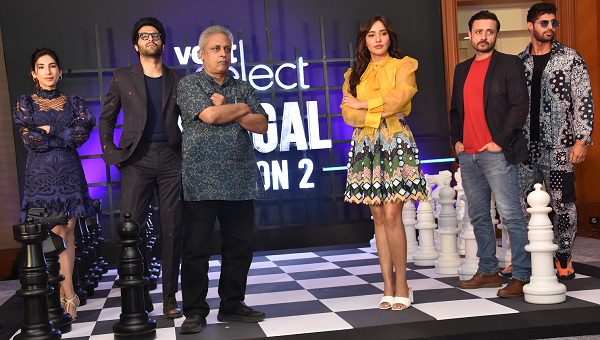 Idealist lawyer Niharika Singh’s legal triumph against her mentor Janardhan Jaitley led to a fitting culmination for the first season of Voot Select’s riveting courtroom drama, Illegal. The power packed storytelling and captivating performances by the cast was widely praised by the audience. The show was highly rated by the critics and was cited as a mass entertainer. The battle between the former mentor and mentee returns for another showdown this time around with higher stakes surrounding the duo. The question always remains – will justice be delivered or truth be denied? The verdict will be announced on 25th November 2021 with Illegal 2 streaming on Voot Select.

Featuring Neha Sharma, Piyush Mishra, Akshay Oberoi, Tanuj Virwani, Satyadeep Misra, Parul Gulati and Anchit Kaur, Illegal is sure to wow the audience with its second season as well. Helmed by Ashwini Chaudhry and produced by Juggernaut Productions, Illegal’s Season 2 promises to be the biggest courtroom drama of the year!

In the second season of Illegal, the mentor-mentee battle intensifies with Niharika (played by Neha Sharma) taking a big risk in starting her own law firm and Janardhan Jaitley (played by Piyush Mishra) embarking on an ambitious campaign to be the next Chief Minister of Delhi. The narrative traces their rivalry as well as delves into three complex legal battles that gives the viewers an insider’s look at the tangled world of complex law, big businesses, and dirty politics. Through these cases, we explore the lives of lawyers and their battles in court and in life.

Returning to essay Niharika Singh on screen, Neha Sharma says, “Portraying Niharika Singh on screen has been a challenging and enjoyable journey for me. She is unafraid to voice her opinions against wrongdoing and ready to take on even the most powerful forces in her fight against Injustice. Illegal Season 2 sees her juggle between personal and professional conflicts while striving to bring out the truth to light. Viewers are in for an engaging courtroom thriller and will love the twists & turns of the journey.”

Excited to return as Janardhan Jaitley in Illegal Season 2, Piyush Mishra says, “The sheer love and appreciation of the first season of Illegal inspired us to take the storyline forward and present a fiercer showdown between Niharika Singh and Janardhan Jaitley. The plot for season 2 is centered around a  battle to outsmart the other with circumstances essayed around law, power, and justice. The dramatic turn of events and sublime narrative will keep viewers on the edge of their seats in this courtroom saga.”

Akshay Oberoi, who returns as Akshay Jaitley in Illegal 2, says, “The intrusive showdown between Neha and Piyush’s character in season two of Illegal makes it a must watch. The viewers gave the show immense love in season one and we are glad to continue the quest to find justice in the upcoming season as well. My character Akshay Jaitley will face a moral dilemma as new situations arise which will see him questioning himself about the real definition of the term Illegal.”

Tanuj Virwani who is playing Niharika’s love interest as Raghav Malhotra says, “I binge-watched Illegal season one when it released and immediately called up the team to congratulate them on the work done. To be a part of this dynamic series is an overwhelming feeling altogether. The script is brilliant, and the viewers are in for an enthralling showdown between the former mentor and mentee who are now at loggerheads with each having their own definition of justice. The character I play is   charming, persuasive and impactful around the events that unfold towards the quest of finding the truth.”

Satyadeep Misra, who plays Niharika Singh’s associate lawyer Puneet Tandon, says, “The first season of Illegal received applause from fans and critics. The storyline gets even more dramatic as we approach season two which will leave the audience hooked. The individuality of each character is portrayed with great impact and centered around the question of whether justice will be delivered, or truth be denied.”

Parul Gulati, who reprises her role as Devika Jaitley in Illegal Season 2, says, “The audience welcomed Illegal with a positive verdict, and we are excited to continue the journey. The storyline also outlines complex cases that will have the audience question their take on what justice truly means. My character Devika plays a key role in this season and will not stop until she gets what she aims for. I’m confident that the viewers will thoroughly enjoy the show. “

Ferzad Palia, Head, SVOD (Voot Select, Voot Kids) and International Business at Viacom18, said, “Ever since its launch, Voot Select has been catering to the ever evolving entertainment needs of its diversified set of viewers. With robust content offerings, Voot Select has become synonymous with top-notch storytelling. With an attempt to become a digital-first brand, we have been creating engaging experiences for our audiences. Having witnessed success with the first season of our original offering, Illegal, we are sure that the second season, which is yet another compelling and thrilling story will glue the audiences to their screens. The teaser of Illegal S2 has been grabbing eyeballs and we are hopeful that this new season will further strengthen our positioning as we endeavor to offer content that is differentiated and unique.”

Commenting on the launch of the second season of Illegal, Manjit Sachdev- Head – Originals, Voot and Voot Select, said, “At Voot Select, it is our endeavour to create content that engages and entertains our audiences. With our recent offerings, we have been able to strengthen ourselves to become a one-stop destination for all entertainment needs. Season 1 of Illegal was well received by the audience. Banking on this success, we are now looking forward to a season 2 filled with thrill and excitement for our subscribers, as we continue to offer content that is meaningful.”