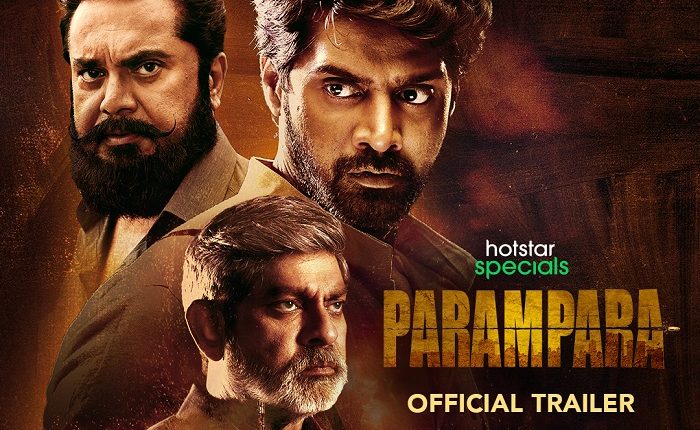 Can the battle between being right and being good ever have a clear winner? Can harbouring bad blood in family ties serve in the long run and help achieve goals?   Disney+ Hotstar’s first-ever Telugu Hotstar Specials, Parampara, written by Hari Yelleti directed by filmmaker Krishna Vijay L and Viswanath Arigela, dwells in the answer. The much-awaited trailer shared by Disney+ Hotstar today, gives a sneak peek into the epic drama based on legacy, loyalty and power on generationally inherited power for the legacy versus righteous. Featuring a stellar cast that includes Naveen Chandra, Ishan, Aakanksha Singh and others, the show is led by superstars Jagapathi Babu as Mohan Rao and Sarath Kumar as Nagendra Naidu. The series is backed by Baahubali producers Shobu Yarlagadda and Prasad Devineni of Arka Mediaworks Production. Parampara will be available to stream on Disney+ Hotstar from 24th December 2021.

Parampara, produced by the creators of Baahubali, ARKA media Works, spins an epic tale of power and revenge. It has been shot on a massive scale much more than a film, in a never-before-seen landscape for the Telugu audience. Marking a first for Telugu viewers, the series’ highly talented ensemble brings to the screen action choreographies packed with an emotional journey that unfolds for each character in the series. Actor Sarath Kumar artfully plays a menacing business baron for whom morals lie in the grey area while Jagapathi Babu is his subservient right hand. Naveen Chandra as Gopi encapsulates the spirit of a young vengeful person for whom Nandi epitomises power abuse and corruption.

Director Krishna Vijay L said, “Parampara is a drama that is based on the power ambitions of its characters. The audience will be treated to a power drama that packs emotions, actions and an enticing story that will keep them hooked on to the series. I feel extremely proud to have been able to direct my very first web series featuring the talented dream cast for the show. I thank Disney+ Hotstar for making Paramapara its very first Telugu Hotstar Specials.”

Talking about the series, veteran actor Sarath Kumar said, “It is always a privilege when you get to be on a project that is going to set examples for the industry. I am honoured to mark my digital web series debut with Parampara and the waves it is expected to create for Telugu digital entertainment space. My role as a powerful business tycoon has multiple layers that have been masterfully manoeuvred through Krishna Vijay L’s direction. As an actor working on a web series for the first time, there are certain transitions that need to be done and it was a journey filled with excitement and exploration about my acting process. I hope Parampara finds resonance with the audience.”

Sharing his experience of working on the character of Mohan Rao, actor Jagapathi Babu said, “Parampara has a very unique story to tell. Through the series, the audience will enjoy a roller coaster ride of power tussles, deception and family infightings. For my character Mohan Rao, there is a silent intensity to the way he walks, moves and talks that is very captivating. The entire build-up of the character had several learnings for me both as an actor and human. I had a lot of fun playing Mohan Rao and I hope that comes through in the series as well.”

Synopsis: Parampara is a David Vs Goliath’s  story where an underdog fights his powerful wily and ruthless uncle for the integrity and honor of his wronged father. Naidu, the patriarch of the Naidu family and his brother Mohan Rao  have an unbreakable bond as far as the world is concerned. But trouble is brewing inside the Naidu household as Gopi, Mohanrao’s son, decides to unmask Naidu who has been oppressing Mohanrao in the guise of love. This sets the platform with the conflict between the two resulting in power conflicts.