“When I got the chance to be on One Mic Stand 2, I grabbed it like a hawk,” says Sunny Leone 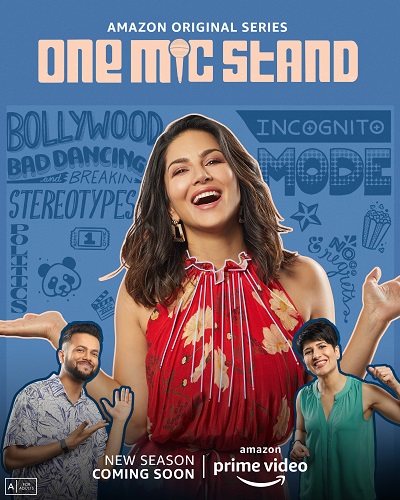 The countdown begins for One Mic Stand Season 2 to release on Amazon Prime Video. This show is the talk of the town as the first season was funny and loved by all with fans eagerly awaiting the second season. The recently-released trailer showcased some phenomenal performances by people whom we could never have imagined to set foot in the comical world of stand-up comedy. The stellar ensemble of celebrity guests includes filmmaker Karan Johar, actor and entrepreneur Sunny Leone, rapper Raftaar, Journalist Faye D’Souza and author Chetan Bhagat, who will be seen performing stand-up comedy for the first time ever.

Talking about grabbing the opportunity to become a stand-up comedian, Sunny Leone says, “I have loved stand-up comedy and I have watched several shows here and abroad as well. Seeing a comedian perform on stage looks so simple and natural but the reality of how difficult it is to actually connect with audiences and make them crack on every joke is something I have learnt very closely now.  As an artist, I am always looking to try new things and showcase my skills to the audience in more ways than one, so when I got the chance to be on One Mic Stand 2 the show I grabbed it like a hawk.”

Sunny further adds, “I am always trying to showcase different sides of myself to my fans and my audience which is why I was attracted to this show in the first place. I thoroughly enjoyed the last season of One Mic Stand, I thought it was hilarious. The sets that the celebrity guests produced were excellent, so the pressure was on to match that level of finesse. I am used to remembering long dialogues and delivering them, but performing live has its own thrill. Stand-up comedy is scarier than falling on a ramp during a fashion show, imagine cracking a joke and nobody laughs, that was my biggest fear. I’ve gotta say, I learnt to take a joke or two on myself and saw the world around me in a lighter perspective. I’m glad to have collaborated with Neeti Palta, she has such a fresh take on every thing and she is a natural. Working with women is always fun because you understand each other’s perspectives and experiences like nobody else and that’s what made my set work so well.”

Now get high-protein and nutritious plant-based Chicken Nuggets and Chicken Keema in the Pink City of India!