Will Ankush Bahuguna and Apoorva Arora be able to draw the line between reality and social media? Watch their upcoming short film ‘Badboli Bhavna’ on Amazon miniTV to find out 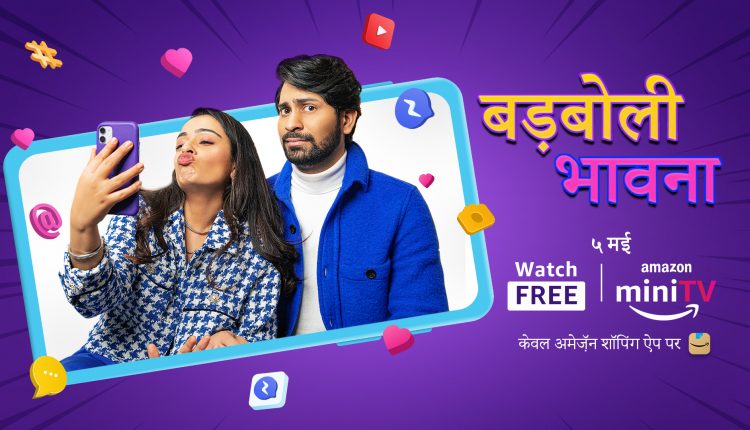 ~ Directed by Pranjal Dua, the short film will release on Amazon shopping app for free on May 5 ~

The short film revolves around the life of Bhavna, a budding social media influencer (Apoorva) and her introvert husband, Sankalp (Ankush) who are in a constant struggle of striking the perfect balance between their personal and digital lives and keeping them separate. With the couple celebrating their two-year anniversary at a romantic dinner, little do they know that they have completely different reasons to rejoice. While the quiet Sankalp just wants to celebrate his relationship, Bhavna considers reaching 1 million followers to be a far more important milestone.

“The fascinating life of social media content creators and their persona has always influenced our lives to some extent. This short film is a lighthearted, fun-entertainer that will give the audiences a glimpse into the lives of these social media stars. Badboli Bhavna is a short film that will leave audiences across India with ample food for thought,” said Girish Prabhu, Head of Amazon Advertising.

“Badboli Bhavna is a very special film for us, for it depicts the life of a couple and their struggles to strike the perfect balance between their personal and digital lives. This is something that a lot of people experience today, and it’ll be great to see the message that the film imparts to them. I couldn’t be more delighted to associate with Amazon miniTV. We are delighted that this short film will premiere for nationwide audiences for free on Amazon miniTV on Amazon’s shopping app. At ILN Studios, our brands MensXP and iDiva, India’s premier men’s and women’s lifestyle brands respectively, constantly strive to tell stories that are highly relatable and relevant to millennials and Gen Zs. Our stories mirror society in a way that highlights pertinent issues like mental health, toxic masculinity, body-dysmorphia, sexism, etc. Badboli Bhavna is one such example and we hope to continue our storytelling journey with fresh, unique, and topical IPs.”, said Angad Bhatia, Founder, MensXP, Co-founder, iDiva & CEO, India Lifestyle Network.

Badboli Bhavna premieres on 5th May on Amazon miniTV.

This Mother’s Day, Prega News embraces imperfection of a mother with #SheIsImperfectlyPerfect