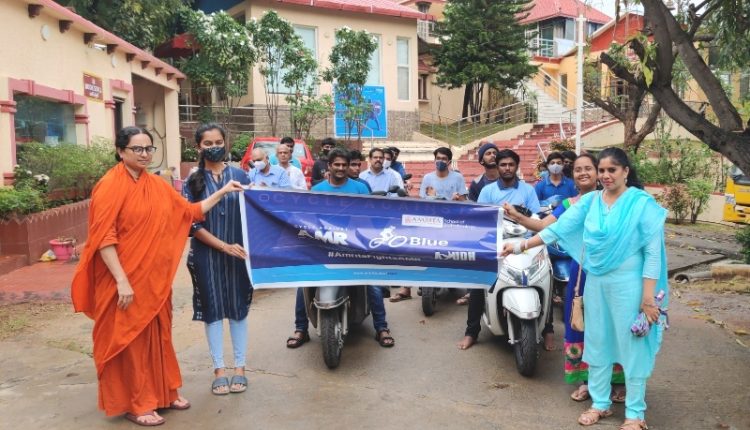 Hyderabad: AYUDH, the youth wing of Mata Amritanandamayi Math, has organised a bicycle rally, with the theme of “Cycle Against AMR—Go Blue”, in the city recently to create awareness among the public about the need for following hygiene practices, and avoiding the misuse of antibiotics to contain antimicrobial resistance, which refers to the ability of microorganisms to defeat antibiotics, and which is emerging as a global threat to the public health.

The rally was flagged off by Mr. C. R. Mahesh, MLA, Karunagapally, in the presence of Dr. Prem Nair, Medical Director, Amrita Hospital and members of AYUDH and the Bicycle Club of CREATOME, the Student Wing of the Amrita School of Biotechnology, Amrita Vishwa Vidyapeetham. Organised on November 21, as part of WHO’s World Antimicrobial Awareness Week (WAAW), observed annually during November 18-24, the bicycle rally began at 9.00 a.m. and ended at 12.00 noon and covered a total of 14 kilometers. About 90 people took part in the rally.  AYUDH’s bicycle rallies took place in several Indian cities including Bengaluru, Delhi NCR, and Mysuru, as well as in cities across Europe and North America.

Dr. Bipin Nair, Dean, Amrita School of Biotechnology in his welcome address emphasized the need for adopting ‘One Health’, a collaborative, multisectoral, and transdisciplinary approach, which envisages the health of not only people but also animals, plants, and the shared environment.

In his special address, Dr. Vishwa Mohan Katoch, former Director General, Indian Council of Medical Research, emphasized the need to shape regulatory policies in the healthcare industry to tackle antimicrobial resistance. He said that there are several socio-economic and cultural factors involved making the fight against antimicrobial resistance much more challenging. He added that doctors must exercise caution and discretion while prescribing antibiotics and help combat this problem.

In his address, Dr. Anand Anandkumar of Bugworks Research, Bengaluru, said that antimicrobial resistance is like a slow pandemic. It is also one of the biggest health threats that humanity faces. India is at the epicentre of this health crisis, and will be a very important region to bring forth solutions to this  global threat.

Mr. Pranav, and Ms. Apurva Johri, founders of Vitalis Phage Therapy, talked about the effectiveness of using phages, types of viruses that infect bacteria, in treating diseases that do not respond to antibiotics. They said that colloquiums such as ALARM can help doctors, clinicians, researchers, and policy makers gain an understanding of and sensitivity to the problem of antibiotic resistance, which is going to be the biggest medical challenge in the coming decades.