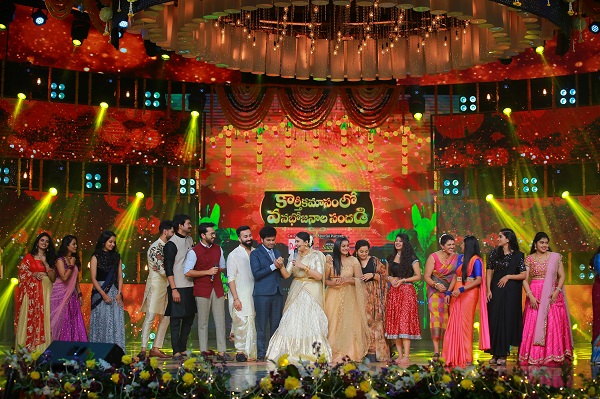 Karthika Masam is a holy month filled with love and lights, during which families get together and have a gala time feasting on delicious food, watching some entertaining movies, and playing some fun games. Zee Telugu, one of the leading channels in the Telugu-speaking states, has always aimed to entertain its viewers and during this auspicious festive month, the channel has a special surprise in store for the audience. To celebrate the festivities and spread cheer and joy in everyone’s lives, the channel is all set to launch a fresh reality show – ‘Super Queen’ and showcase a special program – ‘Karthika Maasamlo Vanabhojanala Sandadi’.

To captivate their ardent viewers, the channel is going to launch its first-ever Sunday afternoon non-fiction series – ‘Super Queen’. Echoing the brand’s vision of women being encouraged to take a small step towards a big transformation in their lives, ‘Super Queen’ is a women-centric reality show hosted by popular and dynamic anchor – Pradeep Machiraju. The show is set to go on air starting 28th November 2021 at 12:00 PM. Super Queen will feature 10 female celebrities who have been masters of their destiny, the ones who have taken bold decisions in their lives and overcome several hurdles to get where they are! While their stories will be highlighted to inspire women across the Telugu states, each episode will also have tasks and activities that will involve these women battling against some major challenges. We will see these inspirational women take on tasks based on culture, self-defense, entertainment, and much more. It will also showcase how their decisions and steps during each task will contribute to a bigger purpose at the end of the show.

Shiva Jyoti, Snigdha, Shobha Shetty, Pooja Moorthy, Navya Swamy, Bhanu Shree, Madhumita, Sri Satya, Yashmi, and Lasya Manjunath will be seen as contestants on the reality show, and we are sure it will be a treat to watch them as they battle their way to win the title of Super Queen. But wait, there’s more! The launch episode will feature the beautiful Anupama Parameswaran, the dashing Raj Tarun and the charming Niharika Konidela as special guests.

Just when you think that’s all for the festival of lights, Zee Telugu brings out another surprise from its kitty! To celebrate Karthika Masam, the channel is all set to showcase a special program ‘Karthika Maasamlo Vanabhojanala Sandadi’, which will depict the story of Avinash portraying the role of a celestial person who is in search of a ring which he lost. On the other hand, Sreemukhi, an unmarried village girl, finds the ring in her food. How Avinash tries to obtain the ring back from her in his own unique manner will highlight the essence of the festival, while spreading cheer and joy in the lives of the viewers. Performances by leading couples of the channel such as Kalki – Pooja, Shishir – Nisarga, Kranti – Ritika, Dileep – Aishwarya, Adarsh – Amitha, and Krishna and Nima Singh, among other stellar acts by Zee Telugu Kutumbam will also captivate the audience. The special event will be telecasted on 28th November at 6:00 PM only on Zee Telugu.

So, what are you waiting for? Block your Sunday, November 28th, and tune in to Zee Telugu to enjoy some blissful entertainment from the comfort of your homes