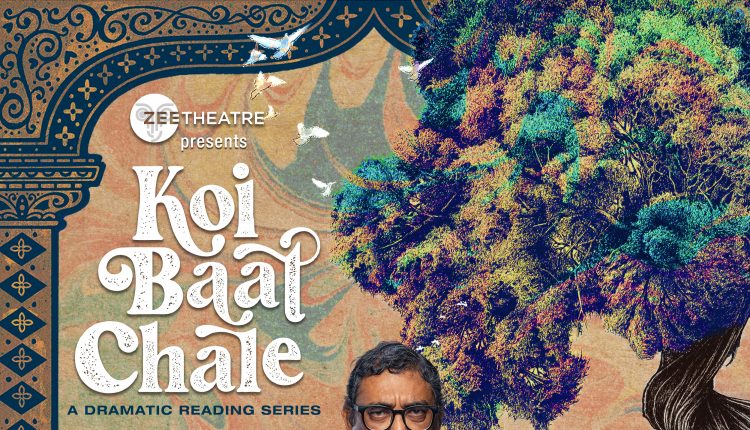 Zee Theatre, the eminent presence on the small screen when it comes to theatre curation, production, and presentation in India, now presents ‘Koi Baat Chale,’ another path-breaking series of dramatic readings as part of their promise under the proposition of Har Din Naya Drama. The series featuring six stories will begin with Saadat Hasan Manto’s ‘Toba Tek Singh’ and ‘Hatak’ narrated by Manoj Pahwa and Sadiya Siddiqui respectively. These will be followed by Harishankar Parsai’s ‘Ek Film Katha’, a satire on run-of-the-mill Hindi cinema (narrated by Gopal Datt), Manto’s ‘Mammad Bhai,’ the tale of a Robin Hood-like character (narrated by Vineet Singh) and Munshi Premchand‘s famous stories. ‘Gulli Danda’ and ‘Idgah’ (narrated by Vivaan Shah and Vinay Pathak respectively).

Helmed by veteran actor and director Seema Pahwa, this series will be airing on 19th November on Tata Play Theatre and Tata Play Mobile app with the two stories: Toba Tek Singh and Hatak.

Shailja Kejriwal, Chief Creative Officer – Special Projects, ZEEL, shares the core idea behind the series and says, “Stories like these are an opportunity to celebrate and rediscover great writers and to see how their brilliance and insight made sense of not just the past but also presaged the future. Narrating these stories brings back the joy of storytelling in our lives in a more intimate way at a time when visuals are taking over the beauty of the written word in its purest form. Also, the themes of the stories we have picked are timeless and will open a door for younger audiences to rediscover their own literary heritage.”

Director Seema Pahwa agrees, “I was focussed not just on how stories are presented visually but how they are written. I love that moment of alchemy when a text comes alive in the voice of an actor.  I believe that these stories are not just about the past but also about the present and probably the future. For instance, ‘Toba Tek Singh’ is not just about Partition but what happens when hate and division take over sanity and peace. Similarly, ‘Hatak’ is about gender questions, the way women are turned into commodities and the invincibility of feminine power. These stories still ring true and that is why it is important to retell them to the new generation.”

Actor Manoj Pahwa adds, “’Toba Tek Singh’ is a seminal take on Partition and reminded me once again of the trauma of displacement and the loss of a sense of home that millions experienced in 1947. The tragedy of a lunatic Bishan Singh who is being ‘exchanged’ by the governments of India and Pakistan stirred up so many emotions in me. The no-man’s land he finds himself in represents the confusion and pain of so many people whose identities were fractured & fragmented by Partition. What makes this story even more powerful is the sarcasm, wit, and satire that Manto infuses in it.”

Discussing about the story she narrated, popular actor Sadiya Siddiqui says, “Manto’s Hatak is centred around a golden-hearted sex worker who lives on the fringes of society and has forged a tenuous emotional attachment with a hawaldar, Madho. The turning point comes when one day, Sugandhi meets a rich client in his car but is cruelly mocked and rejected by him. What interested me most was how Sugandhi, though devastated by this insult, begins to re-evaluate her life. This is a very powerful story because even in indignity, a woman finds the courage to validate her own value as a human being.”

The two stories will also be aired on Dish TV & D2H Rangmanch and Airtel Theatre on 27th November at 2 pm and 8 pm respectively.